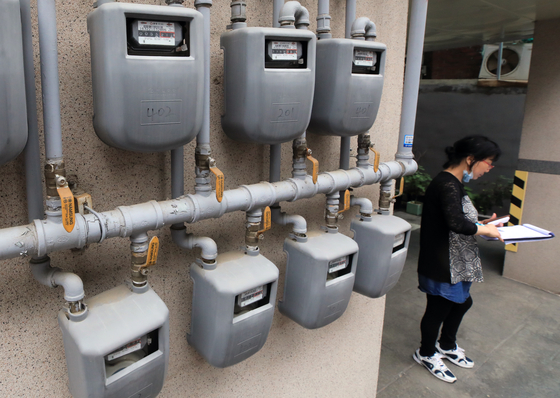 Gas meters affixed to the wall of a building in Dongdaemun District, eastern Seoul. [NEWS1]


Electricity and gas bills are to be suspended for small businesses and rents will be discounted for some to help them survive the pandemic.

Businesses operating in government-owned industrial complexes and in spaces leased from public institutions will get up to 100 percent of their rent waived, according to the Ministry of Trade, Industry and Energy on Tuesday.

Any business struggling to pay its electricity or gas bills can either extend their payment date or switch payment plans from Sept. 21.

Those that meet the legal definition of a small business can apply for a suspension of their electricity and gas bill due dates. Individuals already receiving a discount on their gas and electricity bills are also qualified. This includes people living on basic living benefits, severely disabled people, independence patriots, multi-child households and low-income families.

Gas bills due September through December can be paid three months later. In the three-month period, the 2 percent late fee is waived. After three months, individuals can pay in installments until June next year so they are not hit with one big bill.

Payment plans for gas can be changed through the call centers of the Korea Gas Corporation and via its website from Sept. 21 through Dec. 31. Applications must be submitted before the due date for the bills. Households with payments due before Sept. 21 can extend the due date temporarily for the month.

In the case of electricity bills, a three-month suspension is applied to bills charged from October to December. Households that already applied for an extension in the first round in April can delay their payment due date without having to submit another application. Households that plan to apply this time are encouraged to use the Korea Electric Power Corporation (Kepco) call center.

Small business owners with a contract for 20 kilowatts of power or less can apply immediately without meeting any qualifications. If the contracted power exceeds 20 kilowatts, business owners need documents to confirm that they are a small-sized business.

Shops with a sharp decline in their electricity usage as a result of social distancing can switch to a power purchase agreement plan and save money. The power purchase agreement plan sets a fixed cost for each month and charges extra for any usage above the threshold. The higher the trigger point, the higher the basic fee. If businesses with 10 kilowatts of contracted power reduce the base amount to 5 kilowatts, they can save about 30,000 won ($25) a month.

Individuals can be charged more if they adjusted the set amount within the last year. If the contracted power is lowered during the year and then raised again, the individual will have to return the discounted difference. Individuals who have never adjusted their contract power before can use the system once without having to return all the discounts.

The first to receive rent benefits are 800 businesses operating in government-owned industrial complexes. They will receive a 50 percent cut in rent for the September-to-December period.

Companies residing in leasing space from public institutions under the Ministry of Trade, Industry and Energy will receive up to 100 percent discounts in rent for the same period.

Public institutions will make new hires for the fall recruitment season. A total of 5,139 new positions will be opened at government-owned companies like KPS, Kepco and Korea Hydro & Nuclear Power in the latter half of the year.

The government will also triple the limit of performance guarantees for companies in the die-casting industry from the current 200 million won, and it will provide vouchers so that businesses can receive quality-improvement consulting.

Exhibition organizers will receive support. The government plans to cover the cost of these companies converting their events to online platforms. For textile companies, the government will support large-scale promotional campaigns for the Korea Sale Festa event. It will also push for special financing of some 300 billion won for machinery and aviation manufacturing companies.