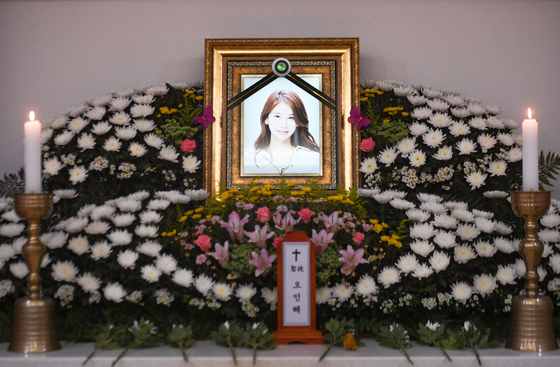 The funeral service for actor Oh In-hye is being held in Inha University Hospital in Incheon on Tuesday. [YONHAP]


Actor Oh In-hye died on Monday while receiving treatment at a hospital.

The cause of her death was not disclosed to the public. Police are said to be investigating the possibility that the actor took her own life.

The 36-year-old was found unconscious in her home on Monday and was immediately transported to the hospital.


The news comes as a shock as she was recently active on her Instagram and YouTube channel, uploading a video on the latter on Sunday.

Her most recent official appearance was in August on the famous YouTube channel “Geunhwang Olympics” (translated) where forgotten celebrities or people who created a buzz in the media appear as guests to talk about what they’ve been up to.

During the appearance she spoke about the 2011 Busan International Film Festival (BIFF) where she made headlines due to a revealing dress she wore on the red carpet.

“I thought [if I wore this dress] people would think of me as this confident and stylish person,” the actor said. However following the event, she saw a considerable narrowing in the range of roles she was offered. “Only roles where I had to expose [skin] or play a femme fatale were offered [to me].”

Oh debuted in the 2011 film “Sin of a Family” and featured in films such as “Red Vacance Black Wedding” (2011) and “A Journey with Korean Masters” (2013). She signed a contract with Redline Entertainment in 2017 but had been working independently after it ended.

Her funeral service will be held at Inha University Hospital in Incheon. She is to be buried on Wednesday.