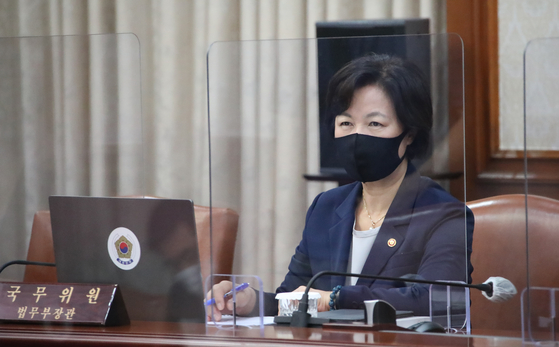 
Prosecutors retrieved Tuesday a transcript of a phone call made to the Ministry of National Defense to request an extension of a medical leave for Justice Minister Choo Mi-ae's son in 2017, according to sources.

The prosecution raided the Ministry of National Defense and the Army on Tuesday as a part of its investigation into allegations that Choo's son, whose surname is Seo, received preferential treatment. Seo served in the Korean Augmentation to The United States Army, or Katusa, for the 2nd Infantry Division of the U.S. 8th Army from November 2016 through August 2018. Choo was the chairwoman of the ruling Democratic Party (DP) at the time.

Several whistle-blowers have said Seo was let off the hook when he failed to return to base at the end of a sick leave in June 2017, which had already been extended once. Suspicions were raised that Choo or her husband had telephoned the ministry to seek a second extension, and Seo was subsequently allowed to use personal days. Choo's aide at the time was also suspected of having contacted the military to extend the leave.

According to the prosecution and military sources, prosecutors raided the Defense Computing Information Agency of the Ministry of National Defense Tuesday afternoon and searched the main server of the ministry to find records of the alleged phone requests.

The mandatory archiving period for phone communication transcripts is three years, and prosecutors earlier said relevant data had been deleted from the call center system of the ministry. Through the raid, the prosecutors confirmed that the transcripts were kept in the main server and seized the evidence, sources from the prosecution and military said.

According to the sources, the prosecution also found a phone number allegedly used to call the ministry to extend the sick leave. It is expected to allow the prosecutors to identify whether Choo or her husband telephoned the ministry to arrange the extension.

Following a revelation by Rep. Kim Do-eup of the opposition People Power Party (PPP), the ministry admitted last week that a record remained in the archive that Seo had an interview with a military officer in June 2017 regarding his medical leave. "I consulted with my parents [about extending the sick leave], and I confirmed that my parents made a request," the record said.

The ministry said Seo's parent did call the ministry, but refused to say which. The ministry added that Seo's twice-extended medical leave did not violate any regulations.

During a National Assembly hearing on Monday, opposition lawmakers asked Choo if she had telephoned the ministry to seek a favor for her son. "I did not," Choo said. Asked if her husband had done so, Choo said, "We live separately and only meet on weekends, so I had no opportunity to ask him."

During the hearing, PPP Rep. Park Hyeung-soo asked Choo if her aide had telephoned the military, based on a former military officer's statement that he had received the call and thought it was odd for a lawmaker's aide to take care of her son's business.

"I want to make clear that I never ordered my aide to make the call," Choo said.

That response was slightly different from her earlier stance. On Sept. 1, Choo was asked during a National Assembly committee meeting if her aide had made the phone call. "It never happened," Choo said.

Park repeated the question to Choo, asking if her aide phoned the military. Choo said, "I don't know about that."

"Did you check with your aide about the phone call?" Park continued.

"I don't want to," Choo replied. "I shouldn't intervene in an ongoing investigation."

Meanwhile, the prosecutors conducted a separate raid of the Army Data System Management Group in South Chungcheong on Tuesday. Because the Katusa unit was managed by the personnel command of the Army, records were also kept about Seo's military service in the group's archive.