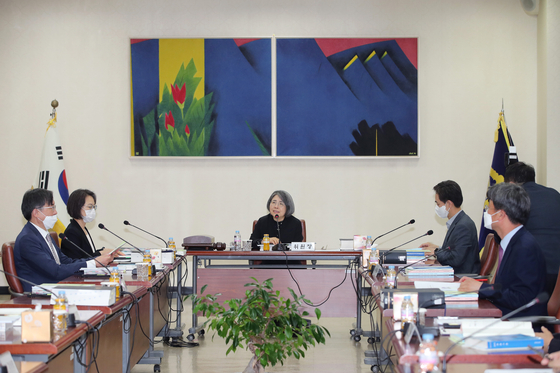 The Sentencing Commission, chaired by Judge Kim Young-ran, center, holds a meeting at the Supreme Court in May. The commission announced new sentencing guidelines on Tuesday for digital sex crimes that toughen jail sentences for crimes involving minors. [YONHAP]


Convictions for producing child pornography could soon carry maximum prison sentences of nearly three decades under a proposal for new sentencing guidelines announced by the Supreme Court on Tuesday.

The toughened guidelines created by the Sentencing Commission, headed by former anticorruption czar Kim Young-ran, are the judiciary’s answer to a growing number of digital sex crimes in Korea — including the recent “Nth room” case. The commission operates under the purview of the Supreme Court.

Under the proposed rules, courts can sentence those convicted of producing sexually explicit material depicting minors more than two times to a maximum prison sentence of 29 years and three months.

That's more than double the length of the 13-year maximum sentence courts are currently permitted to dole out for such crimes.

Those who profit off the sale of such content more than twice would warrant a maximum prison sentence of 27 years, while those convicted of distribution or soliciting minors to participate in the creation of such material may receive up to 18 years in prison.

The guidelines further specified sentencing factors that could increase or decrease the length of a prison sentence depending on the seriousness of the crime, recurrence and the behavior of the convict.

The maximum sentences outlined are to be reserved for the most harmful crimes, including cases in which a victim takes his or her life or is forced to end schooling.

By contrast, the commission also opened up the possibility of reduced sentencing for convicts who worked to mitigate the effects of their crimes, like deleting sexual material before it is distributed.

Those convicted of filming or distributing sexually explicit material through hidden cameras were liable to be sentenced to up to six years and nine months in prison, while criminals who created or spread digitally manipulated sexual content through so-called “deepfake” technology may also receive up to five years and seven months prison time.

If such material is made or distributed for profit, sentencing can be increased to up to nine years under the guidelines.

The Sentencing Commission is set to receive advice on the new guidelines from judges and experts until October, before they will be ratified during a final meeting of the commission in December.

The new guidelines follow a series of official measures implemented by legislators and law enforcement in Korea to address widespread public concerns that those convicted of digital sex crimes are punished lightly.

Suspects in the case — many allegedly led by 24-year-old Cho Ju-bin — are believed to have run a cartel that blackmailed what could be over a hundred victims into providing sexually explicit and degrading photographs and videos of themselves. The materials were then sold to members on chat rooms through the Telegram messaging app in exchange for cryptocurrency.

Many of the victims were discovered to be minors specifically targeted by the suspects due to their vulnerability to extortion, prosecutors said.

The state prosecution service in April said it was strengthening sentencing recommendations for suspects involved in these digital sex crimes, while the National Assembly passed a bill in May aimed at clamping down on such illicit content.