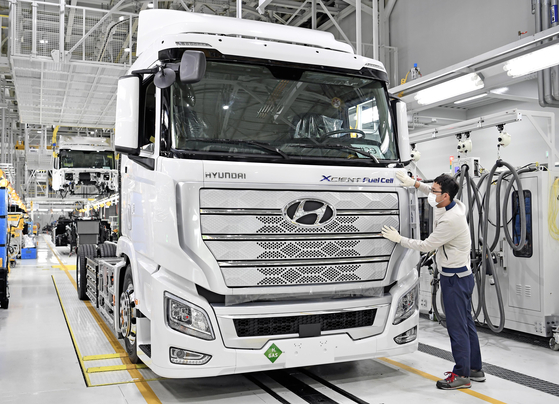 
Hyundai Motor will start selling its hydrogen-powered truck in the United States in two years.

The announcement of entry to the market comes as one of the most promising competitors is facing fraud allegations. Phoenix-based Nikola has been accused by a short-seller of being little more than bluff, and news reports indicate that the Justice Department is investigating.

During a conference call held Tuesday, the Seoul-based automaker said sales of its hydrogen-powered trucks will begin in the United States in 2022, with a pilot program in California next year.

The presentation also mentioned plans for Hyundai Motor to locally manufacture a midsize truck powered by hydrogen in Sichuan, China, from 2022.

"Hyundai Motor revealed plans that it is going to two-track in its electric mobility business with lithium-ion battery vehicles for passenger cars and hydrogen-powered ones for commercial cars," said Kim Jin-woo, an auto analyst at Korea Investment & Securities who participated in the call.

"It picked Toyota as its strongest competitor in terms of hydrogen mobility technology."

Hyundai Motor will start its hydrogen truck business in the United States with big clients that operate an average fleet of 3,000 to 5,000 trucks because they usually run on set routes. This makes it easier for Hyundai to build charging infrastructure.

Ziegler said the company is negotiating with a potential client in the United States that is expected to make orders for Hyundai Motor’s hydrogen trucks bigger than existing orders in Europe.

Hyundai Motor recently shipped 10 Xcient Fuel Cell trucks to Switzerland, where Hyundai Hydrogen Mobility will lease them to logistics companies. Hyundai has plans to ship a total of 50 units by this year and expand the number to 1,600 by 2025.

It also signed memorandum of understanding with French industrial gas company Air Liquide in 2018 to supply a total of 5,000 hydrogen-powered trucks by 2025.


"Compared to Nikola, which has damaged its credibility lately, Hyundai Motor's products have high credibility among customers and can be immediately supplied when an order is submitted," said Lee Jae-il, an auto analyst at Eugene Investment & Securities, who was also on the call.

Hyundai Motor is currently manufacturing Xcient Fuel Cell, the world's first mass-produced heavy-duty truck powered by hydrogen that can drive up to 400 kilometers (250 miles) per charge, at its Jeonju plant in North Jeolla.

"For that reason, Hyundai Motor is expected to secure an upper hand in order competition in the U.S. hydrogen truck market," the analyst added.