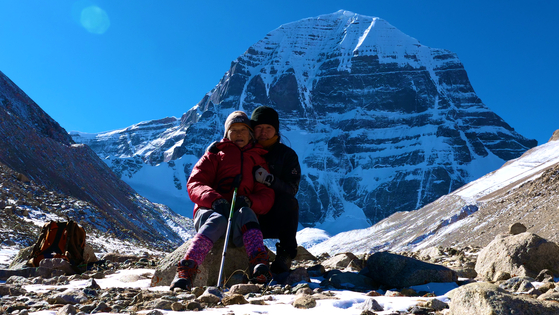 
An 80-year-old grandmother is probably not the first travel companion that springs to mind, but for filmmaker Jung Hyung-min, his dream was to go on an expedition with his elderly mother.

“When my mom leaves this world, I want her to go away with a smile without sorrow for my father and my older brother who passed away early. If she spends her whole life staying at home, I think she may leave with all that sadness within her. So there was no choice but to go on a trip with her,” said 51-year-old director Jung during a recent interview with the JoongAng Ilbo, an affiliate of the Korea JoongAng Daily. 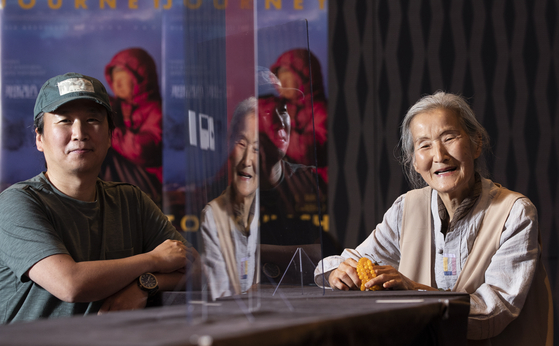 
Jung’s mother, Lee Chun-suk, 86, lost her son less than a year after his birth. And the misfortune didn’t stop there. Her husband left her in 1970, after seven years of marriage. Lee was left to raise two children by herself and spent the next 40 years dedicating her life to motherhood.

However, one day Lee became curious about a 600-year-old Buddhist temple located in Kagbeni of the Himalayas.

From this curiosity, the journey of the mother and son started. On her way back home from the Himalayas, the mother asked, “What is our next destination?”

Jung and Lee's first trip was filmed for the 2017 documentary film “The Way to Mustang.” Jung’s most recent film “Journey to Kailash,” which was released on Sept. 3, follows the three-month-long voyage of the unlikely duo that included stops by Lake Baikal, Ulaanbaatar of Mongolia, the Gobi Desert, Pamir Plateau and Mount Kailash in Tibet. The total length of the road Jung and Lee traveled was 20,000 kilometers (12,427 miles).

Thanks to her son, Lee became an explorer at the age of 80. She celebrated her 84th birthday at the Pamir Plateau that sits 5,000 meters above sea level. On her birthday, she wrote in her journal, “When can I come here again? I’m the happiest granny in the world. I’m 84 but I’m still alive and kicking.”

Lee’s humor and positive energy are the driving forces behind the 89-minute-long documentary from the opening until the end.

“If I knew [the trip] would become a film, then I would have paid more attention to the way I looked,” said Lee with a laugh. “The lead actor is not good but Jung did a good job as a director,” she added.

Lee struggled to raise her children as a single mother. She considered going on a trip as a luxury that she couldn’t afford. Despite Jung asking his mom to accompany him on several trips, Lee always turned down his offers. But after watching some travel documentaries and seeing her own son's trips, Lee finally decided to take the plunge.

People were wary and tried to dissuade Jung, but he knew his mother was strong enough for the trip.

“She was able to drag toppled trees from the mountain and chop them up with an axe. Our four-year journey from the Himalayas to the highlands of Tibet was a kind of warm-up period for my mother to adjust to the altitude. I thought she would be fine and she was actually fine,” said Jung.

In the “Journey to Kailash,” the duo become friends with strangers they meet along the road with ease. Sometimes, Lee hosts a Korean language class on a whim for the kids she comes across. 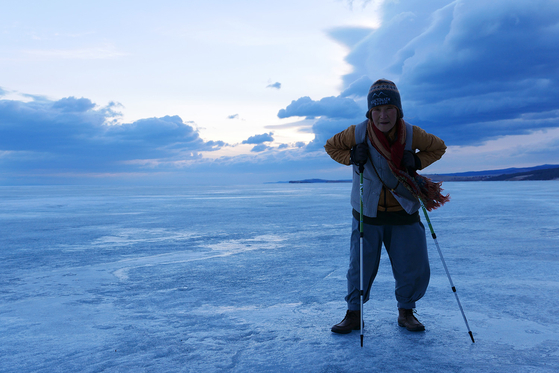 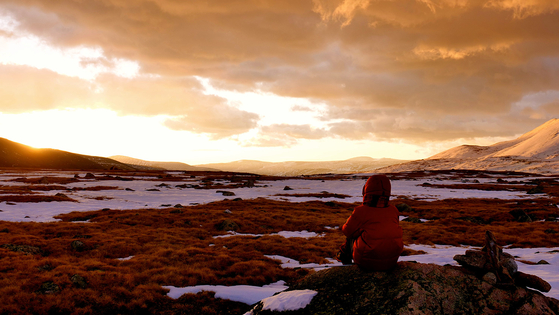 
When asked how she communicates with children so well despite the language barrier, Lee said “They are far from being affluent but I could feel their friendliness from their eyes." Jung added his thoughts on the question by saying, “The people there were good-natured, so they welcomed my mom with open arms.”

The way Lee appreciates the little things she encounters on the road — such as an old tree losing its bark or a goat climbing on a rocky mountain — makes viewers reflect on their own lives. Lee takes nothing for granted.

She often mumbles her prayers by holding Buddhist prayer beads in one hand. Her prayers are “Please don’t make them starve” or “Please make every human being in sorrow happy, Buddha!”

Lee’s prayers sound sincere because she’s been through her own pain and suffering.

“I remember my mom was busy selling instant noodles to high school students at a greasy spoon. She worked hard. I later realized my mom was a promising civil servant while young,” said Jung.

Lee was born in 1934, the second child of seven children. Her parents were eager to educate their children whether they were boys or girls, unlike other traditional Korean parents. Back then, most girls barely finished elementary school but Lee went on to high school and graduated from Soodo Women Teachers' College, an archetype of Sejong University. 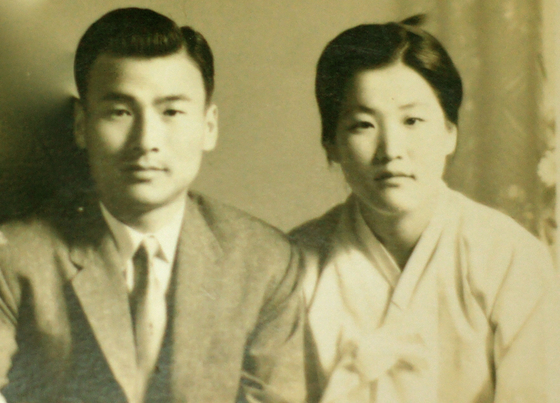 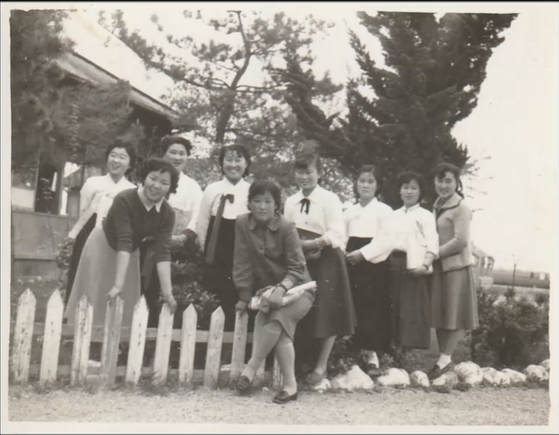 Lee, center, when she was working as a civil servant in Jinyang, South Gyeongsang. [JINJIN PICTURES]


After graduation, Lee became the first female civil servant in 1956 at the age of 22 after a 12-to-1 competition and secured a spot at an agricultural technology center in Jinyang, South Gyeongsang.

Lee used to teach hangul (Korean alphabet) to children in rural areas whenever she had off time.

She got married at the age of 30. Her husband used to work at the Bank of Korea in Seoul but returned home because he wanted to stay close to the southern coast where he grew up.

After her husband passed away, Lee kept working in the public sector for about 10 years but eventually quit for her son.
“My grandmother who lived in Seoul took care of me. My mom came to Seoul once a month to see me but I cried hard whenever I had to say goodbye to her. It made her quit. Since then, she did any given job to raise us. But she regrets her decision from time to time. She says if she kept working, she could have helped me more.”

Lee settled down in Bonghwa, North Gyeongsang in 2008 and has been living in a house built by Jung. Lee spends most of her time taking care of her garden. She wakes up at 5 a.m., enjoys meditating and loves talking to flowers and trees.

“I recently planted more than 100 sweet pumpkins in my garden, but a wild boar ate nearly half of the pumpkins. I got so mad and cried but my son said I’d better sympathize with the hungry boar,” said Lee. “He took the boar's side and not mine,” Lee added, staring at Jung.

Despite the disagreement over the pumpkin-eating boar, it was obvious throughout the interview how proud Lee is of her son.

“Before I conceived him, I had a dream and there was a child who was carrying a globe. I wanted him to become an anthropologist and was surprised to see him become a documentary filmmaker,” said Lee.

Jung graduated from Kyungpook National University and went abroad to study cultural anthropology at McMaster University in Canada. While he was on a doctorate course, the Sept. 11 attack took place. Various social conflicts including the Afghanistan refugee issue moved Jung. He thought that he needed to work on something other than learning at school, so he flew back home.

He first translated TV documentaries and filmed his own trip to the Himalayas in 2011.

“I’m currently working as a part-time lecturer at the department of archaeology and anthropology at my home university as my mom wished. I also came to film the lives of Alaskan natives for the first time among local TV documentary filmmakers. I want to keep presenting the lives and traditions of people who live in extreme areas of the world,” said Jung.

Jung and Lee are currently stuck due to the coronavirus pandemic, but the pair wishes to visit Bodh Gaya in northern India, which is believed to be the poorest city in the world.

In the hope of handing out rice and blankets to people living there when they finally do make their trip, Lee saves between 200,000 won ($168.9) and 300,000 won every month from her pension.

“If I had gone to these remote places earlier, I would have installed more water pipes in more neighborhoods. Until the day I die, I hope to install water pipes so that children can access clean water,” said Lee.

“Even if I die, I want my son to continue my legacy. That’s my wish.”