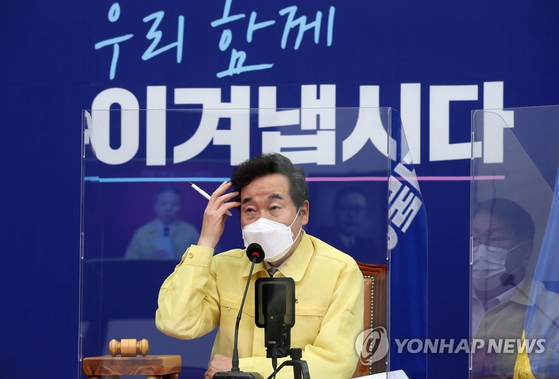 
The ruling Democratic Party (DP) launched Wednesday an investigative body within the party to probe several scandals of its lawmakers, including Rep. Lee Sang-jik, who has been accused of embezzlement as founder of private airliner Eastar Jet.

“The chairman of the body will be Rep. Choi Ki-sang, who had previous experience as the presiding judge of the Seoul Central District Court and chairman of the national convention of judges,” DP Chairman Lee Nak-yon said during the party’s Supreme Council meeting on Wednesday. “The investigative body will be the DP’s version of the Corruption Investigation Office for High-Ranking Officials [CIO]. It will specifically take on investigations of scandals of public members of the DP, concerning corruption, sexual harassment or other illegalities.”

The CIO has the power to indict Supreme Court justices, the prosecutor general, judges, prosecutors and police officials, preventing the prosecution from being able to protect its own members from criminal charges. Although legislation to establish the CIO was passed last year, the office has not yet been created under the continued boycott by lawmakers from the opposition People Power Party (PPP) that has left the CIO director position vacant.

The DP’s investigation body will not have the authority to take disciplinary action on the lawmakers and members of the party, but it will hand over its investigations to the party's ethics committee, which can take actions including expulsion from the party.

“The DP Supreme Council requested that the body first look into the allegations on Reps. Lee Sang-jik and Kim Hong-gul,” said Choi In-ho, DP spokesman, in a press conference Wednesday.

Rep. Lee Sang-jik, founder of Eastar Jet, was reported to prosecution by its pilot union in July for tax evasion and lying on disclosure forms filed for his National Assembly candidacy.

The union said in a statement that Lee “intentionally omitted assets owned by his wife and children” when he reported his family assets prior to the general elections in April. Eastar Holdings, which owns a 39.6 percent stake in Eastar Jet, is fully owned by Lee’s children — the daughter with 33.3 percent and the son with the remaining 66.7 percent.

The opposition PPP on Sept. 10 also reported Lee to the prosecution for allegedly embezzling funds at Eastar and committing corporate malpractice.

And Kim, the third son of the late President Kim Dae-jung, is embroiled in a real estate scandal.

Kim owns four homes, including the residence of the late President Kim in Donggyo-dong, western Seoul. Kim was supposed to declare four properties when he filed his reports to the National Election Commission (NEC) before the general elections in April. But he didn't include the Godeok-dong apartment.

Kim has denied the allegations, saying he does not manage the wealth himself, so he didn’t know that his wife had purchased the ownership right.

“I hope that the investigative body will be able to conduct independent probes that hold fast to the ethics and regulations laid out in the party’s constitution,” Chairman Lee said during the Supreme Council meeting. “And through this process help the members of the party uphold the highest ethics and moral standards and enhance the public trust in the party.”

Plans to establish the body within the DP were first discussed by lawmakers when late Seoul Mayor Park Won-soon, a member of the DP, became embroiled in a sexual harassment scandal in July.

Setting up a separate investigation body within the DP was also a campaign pledge of Chairman Lee when he ran for the party’s chairmanship last month.