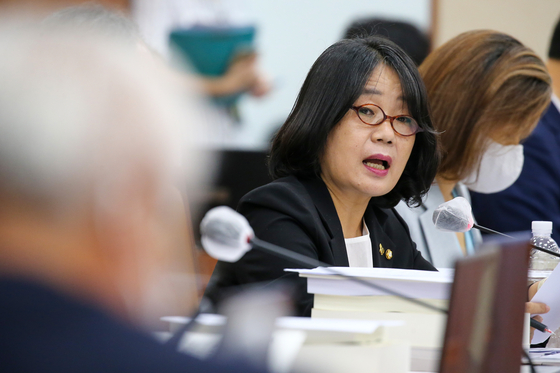 
The ruling party on Wednesday suspended the party membership of Rep. Yoon Mee-hyang, who became a proportional lawmaker based on her career of supporting survivors of Japan’s wartime sexual slavery, after she was charged with exploiting at least one of the victims.

The Supreme Council of the Democratic Party (DP) held a meeting in the morning and approved the suspension of Yoon’s party membership.

“The party takes seriously the prosecution’s indictment against Rep. Yoon and we offer an apology,” Rep. Choi In-ho, chief spokesman of the DP, said Wednesday. “We will suspend her from serving on party posts and exercising her membership of the party. The party will take further action based on the court’s judgment.”

The Seoul Western District Prosecutors’ Office on Monday indicted Yoon, former head of the Korean Council for Justice and Remembrance for the Issues of Military Sexual Slavery by Japan, on eight charges including fraud, embezzlement and breach of trust.

In May, Lee Yong-soo, a comfort woman survivor and longtime activist for the victims, held a press conference and accused Yoon of having exploited her and other survivors for decades. The prosecution launched a probe later that month, but Yoon denied all charges and started her four-year lawmaker term.

Among the charges Yoon was indicted for is a count of quasi-fraud against Gil Won-ok, a 92-year-old survivor. The prosecution said Gil suffers from dementia and that Yoon had exploited her reduced physical and mental capacities and pressed her to donate a total of 79.2 million won ($67,102) to the Korean Council between November 2017 and January this year.

Yoon has maintained her innocence. She accused prosecutors of having disgraced Gil by treating her as if she is incapable of making her own decisions.

The prosecution, however, told the JoongAng Ilbo on Tuesday that a prosecutor had met and interviewed Gil during the probe. Medical professionals also offered opinions to conclude that Gil was physically and mentally unfit to make her own decisions when she made the donations.

On Tuesday, DP Chairman Lee Nak-yon made clear that Yoon's fate will be decided based on the party's constitution and regulations, starting a process to remove her from party affairs. DP Secretary General, Rep. Park Kwang-on, subsequently suspended her from serving on any in-house posts. She had served on the party’s central committee, national delegation and other positions.

If the indicted party member receives a criminal conviction that includes imprisonment, he or she will face expulsion.