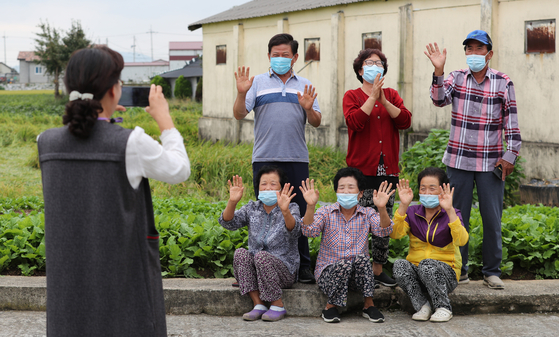 Residents of Sangbang Village in Buryang-myeon, Gimje, North Jeolla, wave for the camera Wednesday as they record videos to send their children for the upcoming Chuseok holidays. Several local government offices across the nation are launching special Chuseok programs to virtually connect residents with their children residing in other areas - and encourage them not to meet in person over Chuseok. [NEWS1]

Highway tolls will be charged over the Chuseok holidays this year to nudge people to stay home and prevent a possible spread of the coronavirus, health authorities announced Wednesday.

First Vice Minister of Health and Welfare Kim Gang-lip relayed in a press briefing that the central government has decided to bypass a recent tradition waiving highway tolls during Chuseok in order to discourage people from visiting their relatives or traveling outside their cities.

Since 2017, highway tolls had been lifted every year during the nation’s two largest holidays - Chuseok and Seollal - to help people reunite with their loved ones and increase spending on domestic tourism.

This year, authorities determined health risks were too high.

The Chuseok holidays, also known as the Korean harvest festival, last three days from Sept. 30 to Oct. 2 this year, but Oct. 3 and 4 are a weekend, which means people will have five days off. Seollal, or Lunar New Year’s Day, is slated for mid-February 2021.

Kim said tolls collected over Chuseok will mainly go toward preventing the spread of the virus, such as disinfecting highway rest areas, where people normally go to eat and use the restrooms.

The health official implored the public not to leave their homes for the holidays, saying Korea was still seeing many traceless Covid-19 patients, which means epidemiologists could not determine where or how they got infected, raising concern of inadvertent transmission.

Kim also stressed the fact that Korea’s daily new cases were still in the triple-digits, which together with the traceless infections, give ample reason why health authorities “have to be extremely concerned” about this year’s Chuseok holidays, when people would normally flock to all corners of the nation.

Health officials said details of the central government’s so-called Special Prevention Period for the Chuseok holidays will be announced early next week, hinting at “additional” restrictions for popular tourist destinations and businesses where people usually keep short distance from one another, such as hagwon (private cram schools), houses of worship, wedding and funeral halls, movie theaters and fitness centers.

Kim said authorities were currently monitoring nationwide clusters and traceless infections to draw up the new set of rules.

The Special Prevention Period, planned to last for two weeks from Sept. 28, was first mentioned by Health Minister Park Neung-hoo last Sunday as he announced the lifting of the so-called Level 2.5 social distancing measures for the greater Seoul area.

Park said the central government decided to impose extra restrictions on the entire country in time for the Chuseok holidays. 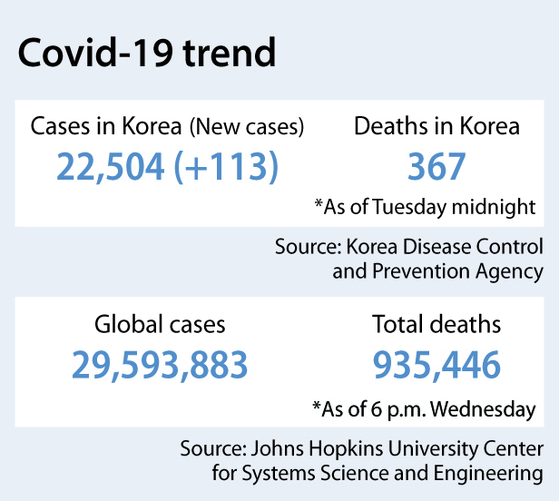 Prime Minister Chung Sye-kyun Wednesday once again urged right-wing civic groups not to rally in Gwanghwamun, downtown Seoul, on Foundation Day on Oct. 3, which is a national holiday, saying it’s “difficult to understand” why they would try to take to the streets again after seeing how a big antigovernment rally held on Aug. 15 Liberation Day in Gwanghwamun led to so many infections.

That cluster is still growing. According to data from the KDCA, 585 people have been traced to the rally cluster as of Wednesday noon, four more than the previous day.

With Chuseok just around the corner, several local governments have launched campaigns to deter nonresidents from visiting their areas and for their residents not to go any place else.

Boseong County in South Jeolla has hung banners across neighborhoods that roughly translate as, “Son, daughter, daughter-in-law, I told you not to come home for Chuseok.”

The Wando County Office in South Jeolla recently launched a program helping elders hold video calls with their children as an alternative to face-to-face interactions. The county office also teamed up with a mowing company to offer special 40-percent discounts to cut weeds around graves so that people outside the county wouldn’t have to visit their ancestors to do the job, often done before or during Chuseok.

In Wanju County, North Jeolla, and Uiseong County, North Gyeongsang, local government officials are planning to record video messages of their elders to send to their kids, and plead with them not to visit for the holidays.

An apartment complex in Wanju launched its own campaign encouraging residents not to invite their children over for Chuseok, and made pickets for elders to hold around the block. On Tuesday morning, some 20 people in their 60s to 80s marched around the neighborhood with signs that roughly translated as, “It’s okay to pause for Chuseok,” “Stay home,” and “Stay in touch while keeping distant.”

“It’s impossible to erase asymptomatic infections from our everyday lives and society,” said Seon. “That’s why we’ve gathered to encourage others to stay home during Chuseok and adhere to virus preventive measures.”

Wanju’s grassroots movement comes as Korea added 113 new virus cases Tuesday, 105 of which were local infections, according to KDCA data, up from 106 the previous day.

Over the past two weeks, Korea’s daily virus count has hovered between 100 and 200, lower than some 300 to 400 cases that were being recorded in late August, but still not hitting the government’s goal of fewer than 100.

Of Tuesday’s local cases, 49 were in Seoul, 24 in Gyeonggi, eight in Incheon, five in North Jeolla, four each in Busan and Daegu, two each in Gwangju, North Chungcheong, South Chungcheong, North Gyeongsang and Sough Gyeongsang, and one in Daejeon.

Among eight imported cases, two each were from India and the United States, while one each was from Uzbekistan, Hungary, Turkey and Ethiopia.

No patients died Tuesday, leaving total deaths at 367, while 432 people recovered, bringing total recoveries to 19,310. As of Tuesday at midnight, Korea had counted 22,504 coronavirus patients in all.