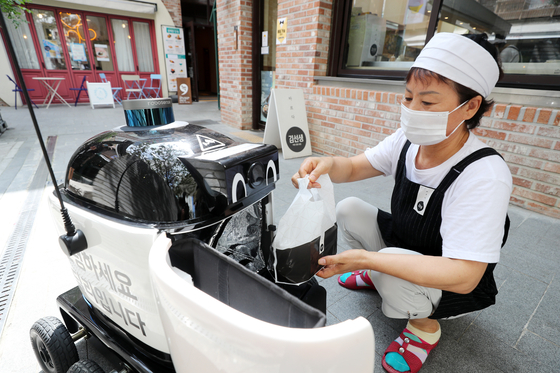 A restaurant employee in Suwon, Gyeonggi, puts food into a delivery robot in August. [NEWS1]


The government will set up an online delivery system for 500 traditional markets by 2025 to help small businesses adapt to the digital age.

Other technologies such as wireless payments and virtual reality maps will be included to help boost the competitiveness of traditional markets.

In addition, the government said it will help 100,000 small commercial operations such as restaurants, cafes and even beauty salons to make themselves "smart stores" by adopting technologies such as robotics, the internet of things (IoT), augmented reality and virtual reality.

Some 10,000 small handicraft workshops will also be helped to adopt technology in their production processes.

“Our economy, which experienced a steep contraction since Covid-19 emerged, saw a recovery in domestic demand thanks to spending since April and an easing of export declines since July,” Hong said. “There were expectations of a full recovery in the third quarter.

“However, since the resurgence of Covid-19 in mid-August, uncertainty has grown about the domestic economy due to strengthened social distancing measures.”

He said businesses have suffered more from the recent social distancing measures than they did in the first wave of the pandemic in March.

Last week, the government announced measures that would spend a minimum 12.4 trillion won ($10.7 billion) to help small businesses, and Hong said they have to adapt to the digital age.

Hong said the government will come up with investment guidelines by the end of September for the Korean New Deal projects including industries and areas the fund will be investing in.

Since the third supplementary budget was passed on July 3, the government has allocated 70.5 percent, or 3.4 trillion won, of the total 4.8 trillion won on New Deal projects as of Sept. 8.

The government has spent 900 billion won, or 80.3 percent, of the 1.1 trillion won budget on strengthening jobs and the social safety net.

Hong urged lawmakers to pass the fourth supplementary budget of 7.8 trillion won proposed last week as quickly as possible so it could be deployed before the Chuseok holidays at the end of this month.

The ruling Democratic Party and the opposition People Power Party have agreed to put the extra budget to a vote on Sept. 22.
“The National Assembly has agreed to vote on the supplementary budget on Sept. 22, which is actually the deadline in executing the budget before the Chuseok holidays,” Hong said.

If the supplementary budget is passed, the government plans to immediately use it to hand out emergency relief grants to people net eligible for unemployment benefits including door-to-door salespersons, insurance salespersons and freelancers.

The government plans to hand out the grants starting Sept. 28.