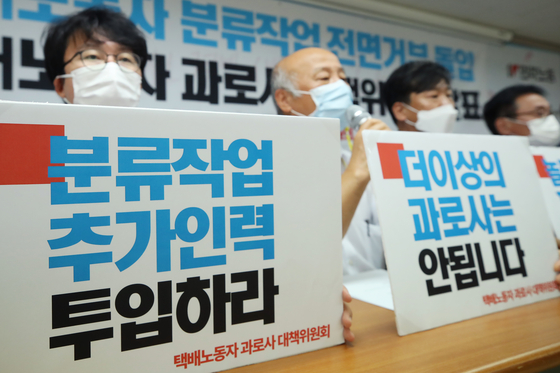 Delivery workers have threatened to stop sorting parcels ahead of the Chuseok holidays, claiming that they are not being fully compensated for work being done.

"We spend half of our working hours sorting deliveries but have never received payment for that work," said one delivery worker at the press conference held Thursday at the Korean Confederation of Trade Unions (KCTU) building in Jung District, central Seoul.

"Sorting work is the main reason why delivery workers work long hours, clocking in early in the morning and working until late at night," said a KCTU member. "Despite working 13 to 16 hours every day to sort packages, we have not received a single dime for our hard work."

The group held a vote of 4,358 KCTU members and nonmember delivery workers, with 95.5 percent voting in favor of the collective action.

Among the people who voted for the strike, 500 people are not members of the union.

Delivery workers argue the current payment structure doesn't compensate them for the many hours they spend sorting deliveries, as they are paid per parcel delivered, not per hour.

The Transportation Ministry advised logistics companies on Sept. 10 to temporarily recruit more workers to sort deliveries as deliveries increase ahead of the Chuseok holidays.

The workers say they regret causing inconvenience and ask for the public's understanding, but the union criticized logistics companies for turning a blind eye to the problem. It also said they are willing to cancel the strike if companies come up with a good plan.