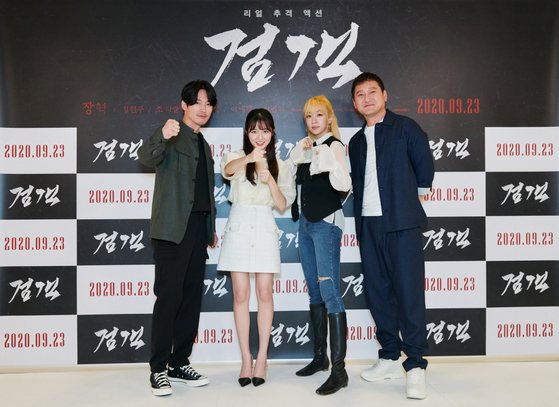 The cast of the upcoming film "The Swordsman" poses for the photo at an online press event Thursday. [OPUS PICTURES]


The cast of the upcoming action drama film “The Swordsman” — from left, actors Jang Hyuk, Kim Hyeon-soo, Lee Na-kyung and Jeong Man-sik — participated in an online press event on Thursday to introduce their upcoming film set to premiere on Sept. 23. Set in the period of the Joseon Dynasty (1392-1910) after King Gwanghae (1575-1641) was dethroned, Tae-yool (played by Jang), Joseon’s best swordsman, goes on a mission to save his only daughter kidnapped by a royal of the Qing Dynasty of China.