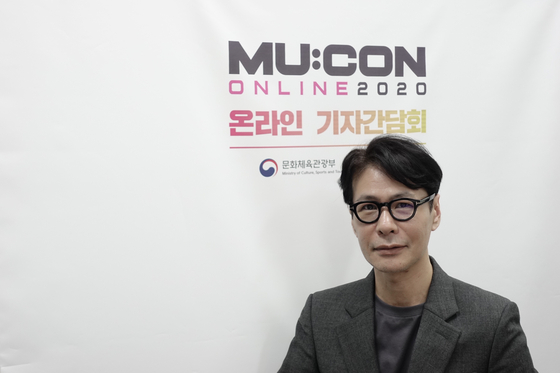 Singer and songwriter Yoon Sang, who is also this year's MU:CON art director, poses for photos prior to an online interview with the local press on Wednesday afternoon. [KOCCA]


While lesser-known musicians are finding it tough to find their future online amid the coronavirus pandemic, MU:CON hopes to provide them with opportunities to reach out to buyers and audiences, art director of this year’s MU:CON, Yoon Sang, said on Wednesday.

Yoon Sang, whose full name is Lee Yoon-sang, was appointed to direct MU:CON 2019 and has been chosen again for this year's event. MU:CON has been organized by the Ministry of Culture, Sports and Tourism and held by the Korea Creative Content Agency (Kocca) every year since 2012 to provide a sphere of discussion for music experts and a stage to perform on for the smaller indie acts, while also allowing local musicians to come in direct contact with overseas buyers for business opportunities.

This year’s MU:CON takes place from Wednesday to Saturday next week, with all events open online due to the coronavirus. The event will kick off with a congratulatory performance from K-pop acts including Teen Top, GFriend, Dreamcatcher and ONF on Wednesday evening. A two-day conference on various subjects will take place on Thursday and Friday, while showcases by performers in and outside of Korea will take place online from Thursday through Saturday. An online pitching and networking function will be available throughout the four days of the event on the official website.

“I think it might be confusing for someone who doesn’t really know what MU:CON is,” Yoon Sang told local press during an online interview that took place on Wednesday afternoon. “These are hard times due to Covid-19, and we thought that MU:CON might not take place. But we are happy that it’s taking place amidst turmoil for the musicians. All the large-scale music festivals around the world are being canceled, and it’s so meaningful that this event is still a go.”

As the art director, Yoon Sang took part in deciding which artists would perform at the showcase while presenting and introducing the event to other participants. During the judgement process, none of the judges are allowed to share their thoughts with each other. The panel consists of numerous experts including journalists and musicians, who were careful to choose musicians from a pool of various genres “because K-pop isn’t the only genre to represent Korea,” according to the director.

“Seventy teams with great potential were chosen as a result,” he said. “Personally, I felt greatly moved by the fact that there were so many artists with so much talent. I hope that MU:CON is a chance for such artists to be recognized more overseas.” 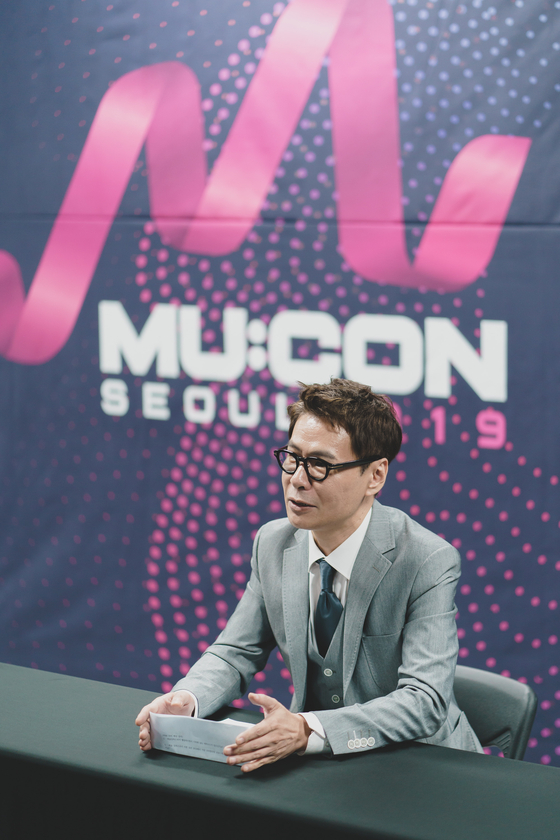 Yoon Sang sits down for an interview at last year's MU:CON [KOCCA]


Other than the fact this is the first time for the event to be held online, this year will focus even more on establishing business ties with overseas buyers for the local musicians through an online platform provided by Kocca. The conference subjects will also revolve around the various predictions of what will become of music after the coronavirus pandemic, as well as how the industry must adapt to the change.

“The focus of this year’s event is that the overseas buyers get to find talent through MU:CON, and we help them introduce the musicians to their home countries,” Yoon Sang said.

He also stressed that while this year, K-pop sensation BTS topped the Billboard Hot 100 for the first time ever for any Korean act and other major K-pop groups continue to entertain fans around the world through the online platform, the seeming openness and accessibility of cyber space has turned out to be deceiving, and it has actually made it harder for smaller indie bands to survive.

“BTS’s performance has been stunning, but we must not forget that realistically, Covid-19 has posed a challenge greater than ever for other artists,” he said. “We need a system where musicians get to perform online, get paid from it and communicate with the fans. Some musicians could just perform for a handful of fans in their own studios, but even that is impossible unless they are famous to some extent.

“Unless the musicians are a part of the big data, then they are deprived of the chance to be introduced at all. In such a situation, MU:CON has opened up the opportunity for all musicians of all genres. We believe that this is an important role of MU:CON because performing here at least gives them a chance to be mentioned, and we’re giving them the chance to perform even if it’s for a very few number of people.”

MU:CON awaits its 10th event next year. As a musician, Yoon Sang just believed this to be another music festival. However, having gotten to know it further, he believes that MU:CON could be one of the most meaningful music events there is for smaller, growing musicians.

“I’ve realized that MU:CON is a sphere of communication that also allows business opportunities. Musicians get to perform whilst some 400 people from the music industry are watching them, and every stage is an opportunity to lead them to marketers and the public. I hope to see more people come to MU:CON and experience the miracle of performing here and being connected to the overseas market,” he said.