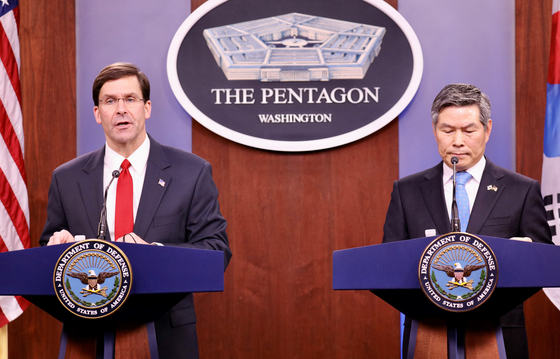 
Korea took part in the Pentagon’s first multinational conference on military artificial intelligence (AI) on Tuesday and Wednesday, widely regarded as an attempt to build a coalition against China’s rapidly expanding technological capabilities.

The “AI Partnership for Defense” meeting, hosted by the Joint Artificial Intelligence Center (JAIC) under the U.S. Department of Defense, included around 100 delegates from 13 democratic countries, including Korea, Japan, Australia, Britain, France and Israel.

The meeting was the first of its kind, held to share “lessons learned and best practices in harnessing AI for their respective and shared defense missions,” according to a JAIC press release.

“What we are doing is nothing short of historic,” said Mark Beall, head of strategy and policy at the JAIC.

Though the JAIC officials have denied the meeting was intended to build a joint front against one particular country, participating countries all share close security ties to Washington as well as similar values in their democratic forms of government.

According to the Pentagon’s 2020 China Military Power Report, Beijing is concentrating on advancing emerging technologies including big data, AI and cloud computing and is pursuing a military-civil fusion development strategy to harness civil technologies and strengthen its military capabilities.

The AI partnership is just one facet of a multipronged effort by the United States, outlined in its National Defense Strategy, to unite allies and fellow democracies into a larger coalition to counter major adversaries like China and Russia.

One multinational forum that has gained recent traction as a coalition of this kind is the Quadrilateral Security Dialogue, also known as the Quad, involving Australia, India, Japan and the United States.

The forum began under the initiative of former Japanese Prime Minister Shinzo Abe during his first term in 2007, and was later revived as an anti-Beijing alliance around 2017 in response to China’s increasingly aggressive behavior and territorial ambitions.

Under U.S. President Donald Trump, security planners in Washington have been envisioning a reorientation of U.S. global strategy away from a system of various bilateral alliances — which some scholars call a “hub and spokes” system — to a more integrated form of collective security that involves enlisting allies in a concerted effort to check China’s ambitions.

U.S. Secretary of Defense Mark Esper made this rationale clear in his remarks at a seminar on Wednesday, where he stressed the necessity of building what he characterized as a structure in the Indo-Pacific akin to NATO in Europe.

Washington will continue to work toward expanding the Quad to involve other countries, Esper said. According to Seoul’s Foreign Ministry, Korea has been asked to join the forum’s upgraded version in the “Quad Plus,” after the country participated in a Quad meeting for the first time in March 2020 along with New Zealand and Vietnam to discuss Covid-19.

Seoul, however, is torn on whether to further commit to U.S. efforts, given its strong economic reliance on China.

In a press conference following his return from the United States, First Vice Foreign Minister Choi Jong-gun said he had relayed to Washington Korea’s unique position of being a close ally to the United States but also a neighbor to China, with which it shares a close relationship both strategically and socioeconomically.

“It wasn’t as if [the United States] forced us to choose between [Washington and Beijing],” Choi said.