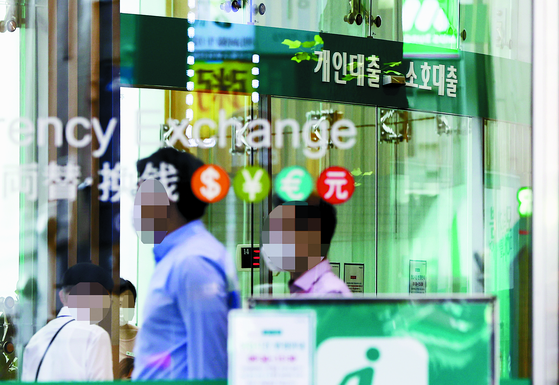 People pass by the window of a bank's physical branch in Seoul. [YONHAP]


Korea's banks failed to inform customers of their rights to demand interest rate cuts, raising concerns that customers might be paying far more interest than they should be.

According to a recent report from the Financial Supervisory Service (FSS) submitted to a lawmaker from the People Power Party, 15 out of 16 local banks failed to properly inform their customers of such rights.

The report includes the results of a "mystery shopping" audit conducted by the FSS, which began last year and concluded in February. Financial regulators disguised as normal customers checked 16 local banks, 188 branches and call centers to see whether they were properly explaining customers' rights to request cuts to interest rates.

Scores are deducted from a maximum score of 100 points, with a point deducted each time a bank employee fails to accurately explain the customer’s right.

According to the report, all five commercial banks received scores of less than 70 points, which is the minimum score accepted by the FSS.

Hana Bank received the highest score, with 63.7 points. It was followed by Woori, with 52.4 points; KB Kookmin, with 49.5 points; Nonghyup, with 48.8 points; and Shinhan Bank, with 47.5 points. Financiers ranked under 60 are considered “poor” and those that scored between 60 to 70 points are considered “insufficient” under the FSS standards.

Customers who take out loans from banks have the right to ask them to lower their borrowing rates if their credit profile improves, whether due to promotions at work or a change in employment. Banks are responsible for informing customers of such rights. If a customer demands a rate cut, banks are obliged to internally review the request and notify the customer of the result within 10 business days.

While customers have had this right since 2002, it wasn't until June 2019 that a law was passed requiring banks to provide borrowers with that information. Savings banks, credit card companies and insurance companies are all affected by the law.

The state-run Industrial Bank of Korea received 58.8 points. One of Korea’s top internet-only banks, Kakao Bank, received 48 points. Six regional banks were well below average, scoring in the 40- to 45-point range. Among them, Jeju Bank, also a subsidiary of Shinhan Bank, scored the highest, with 45.3 points. The lowest was Busan Bank and Jeonbuk Bank of the North Jeolla region, each scoring 41.7 points and 40.8 points, respectively.

The FSS says it plans to inspect the quarterly performance results from 16 banks and request action plans to correct the issue.

In 2018, around 171,000 borrowers exercised such rights and successfully lowered their borrowing rates, collectively saving an annual 470 billion won ($405 million), according to data from the Financial Services Commission.

Open for business, sort of