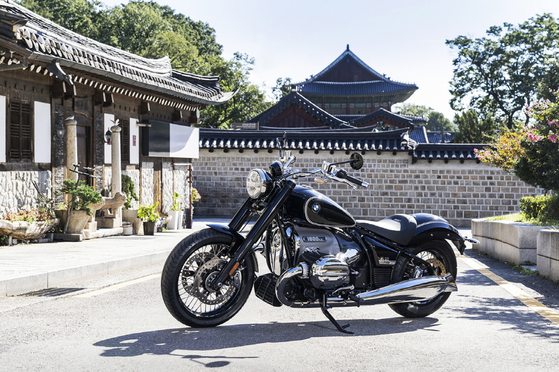 
BMW Motorrad released the new R 18 in Korea on Friday, which comes with the strongest engine ever from the German motorcycle maker.

Designed as a bike for both on-road and off-road experiences, the R 18 pays homage to BMW Motorrad’s 1936 BMW R 5. The model was one of the 97-year-old company’s biggest successes and a “game changer” that set the standard in the motorcycle industry and was copied by many competitors back then, BMW said.

The new version took some of the core design concepts from the original, including the oil tank shape and the emblem on it, the tube frame and the iconic black paint.

Its boxer engine is the most powerful yet among BMW’s models so far. The 1,802-cubic-centimeter (110-cubic-inch), two-cylinder engine can deliver up to 91 horsepower.

To offer a more “classic” riding experience, the seat’s suspension does not come with an electronic control system. But the model boasts high-tech features, including automatic stability control that adds balance during acceleration and functions to help driving in reverse or starting the engine on a hillside.

The company explained that another big focus in developing the new R 18 was expanding choices for customization. The bike was made in a way that allows for parts of different models to be attached and removed. A total of 127 custom parts will be offered to customers.