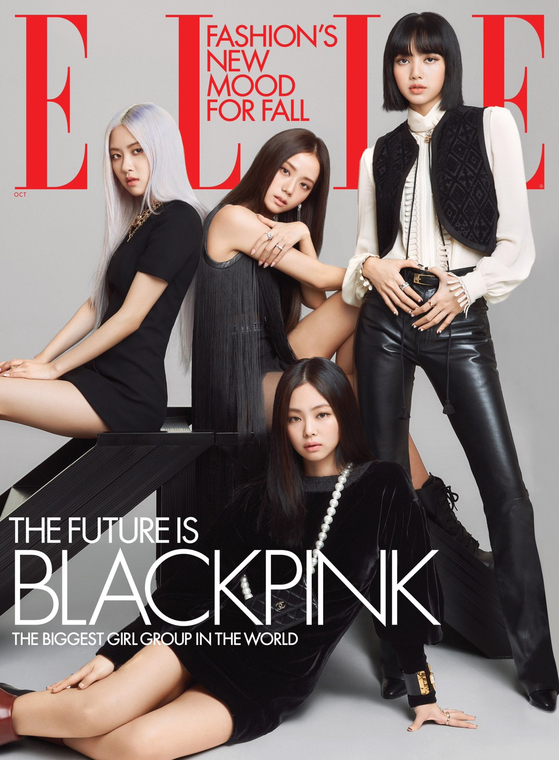 Girl group Blackpink made the cover of the American edition of Elle magazine, YG Entertainment announced on Friday.

The group was on the cover of the October issue with the headline “The future is Blackpink, the biggest girl group in the world.” The story mentioned Blackpink’s upcoming full-length album “The Album” and Netflix's original documentary “Blackpink: Light Up the Sky.”

Elle placed Blackpink in the lineage of great girl groups of the past, such as the Spice Girls from Britain, and quoted the American composer Bekuh Boom as saying, “Rosé, Jennie, Jisoo, and Lisa are going to set the standard for the new girl group in America. We haven’t had anyone like them since Destiny’s Child.”

Blackpink has released a series of new songs this year. After featuring on Lady Gaga's "Sour Candy" in May, they released the lead track for their upcoming full-length album, “How You Like That," in June, followed by "Ice Cream” in collaboration with Selena Gomez in August.

“Ice Cream" hit No. 13 on the U.S. Billboard Hot 100 singles chart, a career high for the group, and ranked eighth on the Billboard's new Global 200 chart.

“The Album,” Blackpink’s first full-length album in four years, will drop on Oct. 2, and the Netflix's documentary “Blackpink: Light Up the Sky” will be available for streaming on Oct. 14.