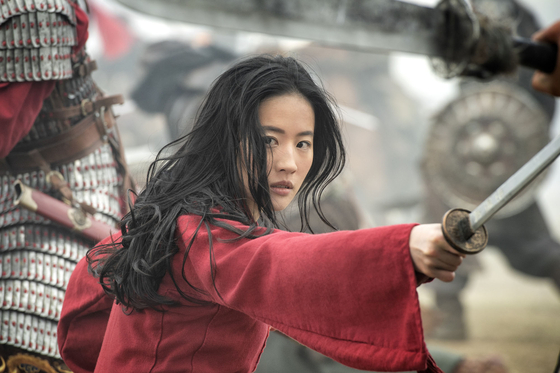 
Despite controversies and boycott movements, Disney’s live-action film “Mulan” pulled ahead of Christopher Nolan’s “Tenet” to reach No. 1 in daily box office sales on the day of its release.

But ticket sales for “Mulan” have been disappointing, even considering the escalated level of social distancing. “Tenet,” which premiered under similar circumstances, sold about 137,000 tickets on its first day.

The reservation rate, or percentage of overall movie reservations, for “Tenet” was at 29.8 percent on Friday, higher than that of “Mulan,” at 25.2 percent.

The film is a remake of the 1998 animated film with the same title, about a young girl’s transformation to become a great warrior in ancient China to protect her family.

But the film has been swept up in a whirlwind of disputes that began when lead actor Liu Yifei uploaded a Weibo post last year claiming that she supports the Hong Kong police's suppression of prodemocracy protesters. After the film was finally launched on the streaming service Disney+, the film once more faced criticism for thanking governmental entities in Xinjiang, China, where the government has detaining Uyghurs — a predominantly Muslim, Turkic-speaking ethnic minority group — in massive internment camps.

The film has also received negative reviews for lacking an understanding of Chinese culture and deviations from the original plot. Critics have said it instead places more emphasis on up-to-date computer-generated imagery technologies and Hollywood action sequences.