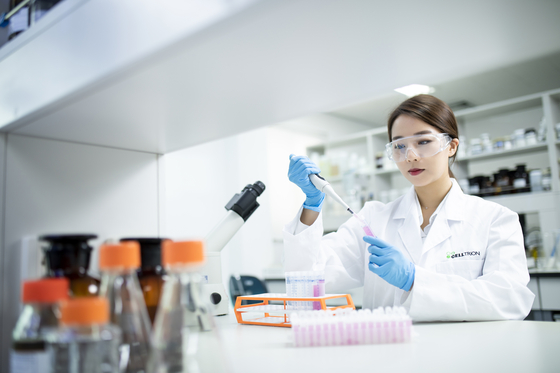 A Celltrion researcher conducts tests at the company’s headquarters in Incheon. [CELLTRION] 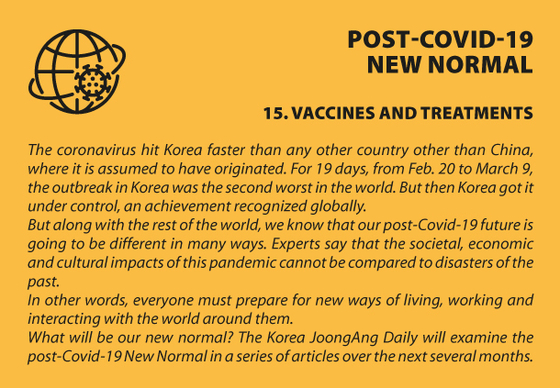 Korea has never been a major global player when it comes to medical exports — at least not until 2020.

In February, Korea was one of the first countries to deal with a serious Covid-19 outbreak. As the pandemic spread across the globe, some of Korea’s most effective measures to contain the spread of the virus garnered global interest, as did its masks, sanitizers and testing kits.

Suddenly, Korea went from a minor player in the global medical market to an expert in protective equipment and virus containment measures.

Exports grew accordingly. Hand sanitizer exports grew 67 times on year during the first half of 2020, while shipments of testing kits increased 507 percent during the same period.

With the confidence gained from that early success, the Korean government set its sights on the next big thing in the global fight against Covid-19: Drugs.

“Our goal is to develop a Covid-19 treatment by this year and a vaccine in 2021,” said Korea Disease Control and Prevention Agency (KDCA) Commissioner Jeong Eun-kyeong during her opening remarks celebrating the launch of the agency on Sept. 15.

But government promises don’t always come true — especially in the field of biopharmaceuticals, where research and development (R&D) projects can go wrong any time.

So exactly where does Korea stand in this global race to find a Covid-19 treatment, and will the sudden push cause a fundamental change to the country’s biopharmaceutical industry? 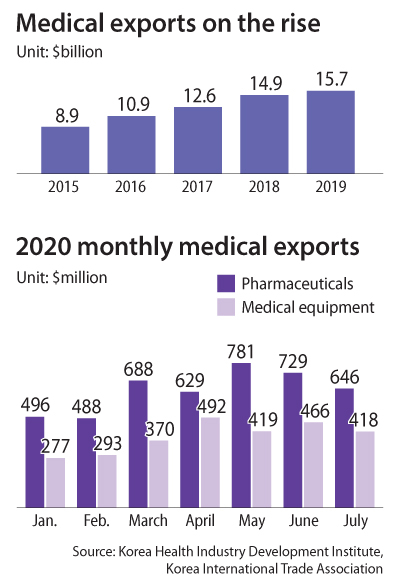 
Korea’s medical export breakthrough came from testing kits. By March, Seoul was receiving calls from other governments asking for diagnostic kit exports. Government figures show that the value of test kit exports hit a peak of $214 million in April, an eightfold jump compared to the previous month.

The confidence was clear in local stock prices, with a big boost to biopharmaceutical and medical equipment shares.

Many analysts raised concerns of a “bio bubble” existing in the market, and while this may be true from a short-term perspective, export and R&D figures show Korea’s bio industry did manage to achieve fundamental growth over the years.

According to data from the Korea Health Industry Development Institute, medical exports jumped from $8.9 billion in 2015 to $15.7 billion last year. In this year’s first half, Korea exported $9.6 billion worth of medical products, up 26.7 percent on year. Roughly half of that revenue did not come from Covid-19 related products, but biosimilar products.

But while Korea has made substantial progress in bio production technology, experts say developing new drugs from scratch is on an entirely different level.

Searching for a Covid-19 vaccine


Progress in treatment and vaccine development can be measured by stages of clinical trials.

Both vaccines and treatments are crucial for the fight against Covid-19, but they do very different jobs. While a vaccine prepares the body's immune system to fight off the disease, treatments are used when patients are already ill to lessen their symptoms and help them get better. A vaccine is a preventative measure, while a treatment helps somebody who is already sick.

At the moment, treatments are likely to be created quicker than vaccines because a lot of the drugs being tested contain elements that have previously been approved for other diseases. This strategy is called drug repositioning. It means the safety of the treatment has already been verified to a certain degree, and these drugs are often permitted to skip Phase 1 clinical trials. Nine Korean companies are currently developing repositioned drugs.

Drug development — whether for a vaccine or treatment — typically goes through a process of animal testing and three phases of clinical trials on human patients before a candidate is considered for authorization to be launched on the market.

As of mid-September, the Ministry of Food and Drug Safety has approved 11 treatment candidates to proceed with clinical trials for commercialization.

Among them, GC Pharma’s GC5131 and Celltrion’s CT-P59 are new substances and candidates that are receiving the most spotlight. These two companies were announced as government partners in the search for a Covid-19 treatment earlier this year, which implies they have a good chance of receiving authorization faster than others.

Celltrion’s CT-P59 recently completed its Phase 1 clinical trials on a group of 32 participants this month and received a nod to begin Phase 2 and 3 trials on Thursday.

A plasma treatment made from immune proteins extracted from recovered patients, GC Pharma’s GC5131 was approved to undergo Phase 2 clinical trials but has not yet started. It was exempted from conducting Phase 1 trials given the general safety of plasma treatments proven in other commercialized drugs.

Both candidate drugs are to start mass production this month ahead of market authorization so as to prepare stock in advance.

At the moment, California-based Gilead Sciences’ remdesivir is the only Covid-19 treatment that has completed Phase 3 trials in Korea and is currently in use at medical institutions after obtaining an emergency usage approval in July. Its degree of efficacy has been met with mixed reviews by medical experts, but it’s the only option authorized for safety and efficacy in treating coronavirus patients in Korea.

As for vaccines, two candidates are being tested on human patients in Korea: U.S. bio start-up Inovio’s INO-4800 and Korean company Genexine’s GX-I9, which was selected to receive government funding last month. Both are undergoing Phase 1 clinical trials. No vaccine has been approved for emergency use. 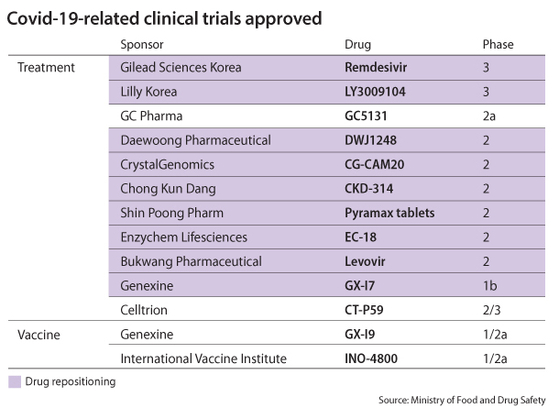 
In terms of procedural advancement, Korean companies fall behind their global competitors in the Covid-19 race.

U.S. pharmaceutical companies Regeneron and Eli Lilly are the front runners with Covid-19 treatment, both conducting Phase 3 clinical trials. Regeneron, in particular, is expecting to disclose test data at the end of this month.

In the vaccine segment, British bio firm AstraZeneca and Moderna and Pfizer — both headquartered in the United States — are conducting Phase 3 clinical trials.

Compared to these multinational firms that are pouring billions of dollars into the Covid-19 initiative, experts say Korean companies lack in resources and experience.

“With testing kits, local companies already had the production capacity and experience in development and exports. But that’s not the case with treatment or vaccines,” said Oh Ki-hwan, the industry policy division director at KoreaBIO, an advocate group for local biopharmaceutical firms.

“At the current stage, it’s hard to pinpoint the possibility of treatments or vaccines developed in Korea turning out to be a success. It’s a task where the stakes of failure are extremely high.”

But the uncertainty of success is not just an issue for Korean companies.

Vaccines normally take more than 10 years to be developed. In an unconventional move, governments around the world are fast-tracking approval, but no matter how much they speed up the process, clinical trials can go wrong — even for global players with huge amounts of money.

On Sept. 9, AstraZeneca halted its Phase 3 clinical trials worldwide in order to investigate a “potentially unexpected illness” that occurred in one of its trials.

Until that moment, the British company was thought to be the closest to releasing a Covid-19 vaccine. The very next day, AstraZeneca and eight other multinational pharmaceutical firms released a joint pledge that they will not rush vaccine development at the expense of safety and efficacy.

“The reason this incident caused such a huge stir in the market was because so many people overlooked the possibility of failure under the emergency state of a global pandemic. It’s time we brush off the impatience and excessive anticipation like expecting a Covid-19 vaccine this year,” said Sun Min-jeong, an analyst at Hana Financial Investment.


But even if Korea isn’t among the first countries to come up with a treatment or vaccine, this doesn’t mean the R&D efforts are not worth the time and money.

Experts say production facilities are insufficient to serve global demand even if a vaccine is developed in the near future. Until a time comes when everybody is vaccinated, treatments will be needed to cure patients.

“Because supply will be so limited, countries with buying power are already coming forward to secure batches ahead of others. Even if a treatment or vaccine is developed overseas, we can’t ensure it will be accessible to the Korean public,” said Jeong Chan-woong, who heads the PR and research unit at Korea Pharmaceutical and Bio-Pharma Manufacturers Association.

“That’s why we need local companies to have this technology. It’s a matter of public health and sovereignty in pharmaceutical supplies.”

Some analysts remain skeptical that Korea can succeed in developing a treatment or vaccine at all. Even in this worst-case scenario, Korea’s production capacity could create opportunities in contract manufacturing.

“At first, Covid-19 vaccines were thought to be a one-time revenue source. Now, there’s anticipation that they will be a sustainable revenue source like seasonal flu,” said a KTB Investment report released Sept. 2.