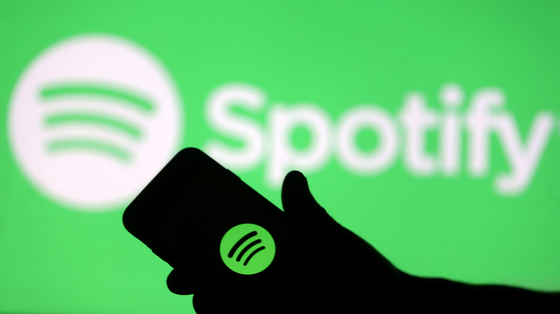 A smartphone is seen in front of a screen projection of Spotify logo, in this picture illustration taken April 1, 2018. [REUTERS]

Spotify, the world's largest music streaming service, has long been rumored to be coming to Korea, one of the few major markets where it is not yet available. The rumors remain and are being supported by evidence of an imminent arrival.

In particular, the local subsidiary of the Swedish company has increased its capital by a significant amount.

Other indicators have been noted. Spotify Korea accounts were opened on Twitter and Instagram last month, although no postings have been made as of yet. The international platform, which is not visible locally, can now be viewed in hangul.

Spotify Chief Executive Daniel Ek has said the company wants to operate in Korea, but no date has been set. Spotify Korea declined to comment.

The company opened an office in Gangnam, southern Seoul, in January, and Peter Grandelius, head of legal at Spotify, is registered as the head of the branch.

The Korean unit started off with 900 million won ($776,000) in capital but increased it to 5.8 billion won earlier this month, according to media reports. It appointed directors and an auditor.

Despite the progress, licensing remains an issue for the streaming company. Music streaming service providers must make agreements with groups to determine the scope of music provided and compensation.

The negotiation with those groups and major music distribution companies is considered as the key for music streaming operators, since the failure could lead to limited offerings of music performed by Korean artists.

Apple Music started in Korea in 2016 but failed to take off due primarily to lack of Korean music offerings compared to domestic streaming services like Melon and Genie Music.

Spotify has 299 million users, including 138 million paid subscribers, across 92 markets.