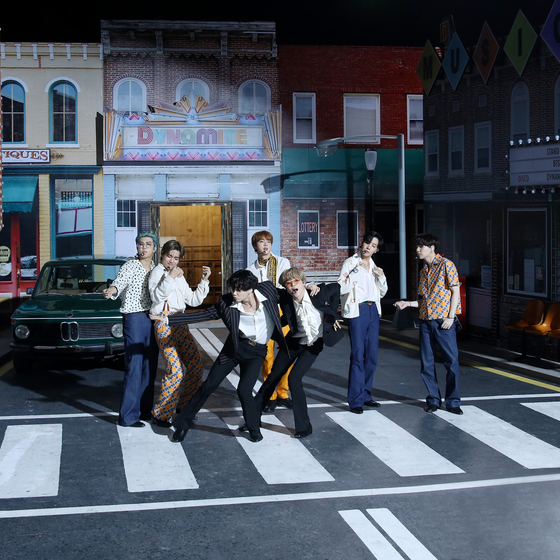 This photo provided by Big Hit Entertainment on Saturday, shows K-pop group BTS posing for a photo at a set in South Korea where the band filmed a performance for the iHeartRadio Music Festival in the United States. [YONHAP]


K-pop superstar BTS has delivered a performance of its new single "Dynamite" and several of its past hits at the iHeartRadio Music Festival in the United States.

The seven-member boy band presented a prerecorded live stage performance of its new disco-pop single, along with its past hits — "Make It Right," "Spring Day" and "Boy With Luv" — at the event, which was streamed online Friday evening (U.S. time).

BTS was booked along with Alicia Keys, Migos, Thomas Rhett and Coldplay at the first day of the two-day festival.

"We should be there with real people and real audience. That's what makes us so sad. But still, we're going to do our best," BTS leader RM said in a preperformance interview with U.S. radio station KIIS FM held in conjunction with the music festival.

BTS also shared how "Dynamite" was conceptualized and created in the midst of the global chaos from Covid-19.

"We, too, felt desperate, to be honest with you, so we needed a breakthrough from that and focus on what we can do best and it was music and performance. We thought that the world needed some simple, positive energy," RM explained.

The band also shared some details of its upcoming album scheduled to drop within the year. "It's going to be a little different than the single, so stay tuned," RM said.

Meanwhile, "Dynamite" reached No. 21 on Britain's Official U.K. Singles Chart on Friday (British time), dipping three notches from the previous week. The song debuted at No. 3 four weeks ago on the British singles chart, earning the group its career high on the British chart.

The Korean boy band made history by becoming the country's first recording artists to top Billboard's Hot 100 singles chart with its latest single. The previous highest-charting Korean artist was soloist Psy, whose 2012 viral hit "Gangnam Style" peaked at the No. 2 spot.

"Dynamite" took the top position on Billboard's main singles chart for the second straight week last week, becoming the 20th song in history to have remained on top in its second week following a No. 1 debut. The track stood at No. 2 on the Hot 100 chart this week.