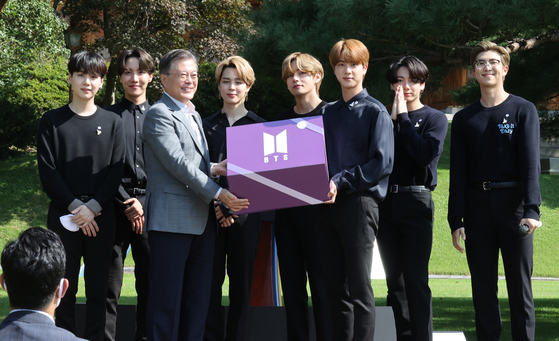 President Moon Jae-in, third from left, poses holding the ‘Year 2039 Gift’ box with K-pop group BTS at the inaugural Youth Day ceremony at Nokjiwon, a verdant garden inside the presidential compound Blue House, in central Seoul on Saturday. The purple-colored box, which contains musical achievements and messages from BTS members, will be stored at the National Museum of Korean Contemporary History in Seoul, like a time capsule. The box will be opened at the 20th Youth Day event in 2039. At the ceremony, the members of global K-pop superstar BTS delivered a powerful motivational speech for Korean youth, sharing candid tales of their inner struggles on the path to becoming one of the world's most popular music acts in history. [YONHAP]