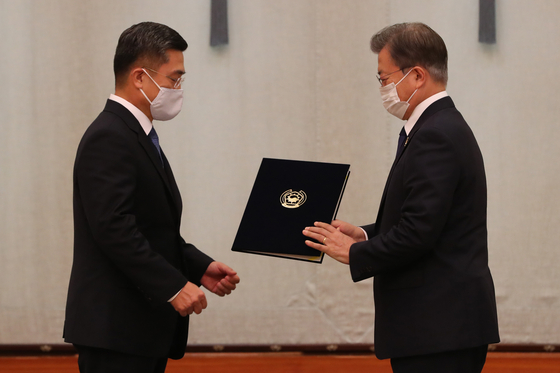 
General Suh Wook was sworn in as Korea’s Minister of National Defense on Saturday, making him the first Army commander to head the country’s defense in the Moon Jae-in administration.

Suh, 58, was Army chief of staff before he was tapped by Moon to succeed outgoing minister Jeong Kyeong-doo last month.

Known for his keen strategic mindset, Suh was widely regarded as the best figure to successfully see through the transfer of wartime operational control (Opcon) back to Korea from the United States, a process that is envisioned to be completed around 2022.

That expectation was reflected in Suh’s acceptance speech delivered at his appointment ceremony Saturday, in which he pledged to expedite Opcon transfer on the basis of a firm alliance with the United States.

“I will ensure transfer conditions are met ahead of schedule on the basis of a precise assessment of the abilities our forces have built over time, including the military’s key combat abilities, for the realization of responsible national defense,” Suh said.

Along with Suh’s appointment, Moon nominated Air Force Chief of Staff Won In-choul as chairman of the Joint Chiefs of Staff (JCS), making him the third-ever Air Force officer to be appointed to Korea's highest military office.

The two choices were surprising, given that Won belongs to the Air Force Academy’s class of 1980, making him a year older than defense minister nominee Suh, who entered the Korea Military Academy (KMA) in 1981.

Traditionally, a defense minister is more senior than the chairman of the JCS, and it is rare in the Korean military that a figure from a junior class is appointed above an older officer.

Analysts think the pair’s nomination represents an attempt by the Blue House to check the influence of the KMA, which has long dominated top positions in the military and wielded undue sway over politics even after the end of the military junta, which was almost entirely composed of KMA graduates.

Won is expected to be appointed JCS chairman on Monday, as the National Assembly has already confirmed his nomination.

Suh’s first task as defense chief will be to oversee discussions with the United States over Opcon transfer at the Korea-U.S. Security Consultative Meeting slated for November.

But whether Opcon transfer can take place as hoped by the administration within Moon’s term until 2022 remains in doubt.

The Covid-19 pandemic has significantly delayed the timetable for assessments of the Korean military’s ability to assume command of allied forces, namely with the scaling down of joint command post exercises last month.

The bigger impediment, however, may be the ongoing strategic concerns underpinning U.S. security policy in Northeast Asia.

China’s growing military clout and muscle flexing in the region has put the United States on edge, pushing security planners in Washington to enlist key allies in the region, like Korea, in an envisioned multilateral coalition to contain Beijing.

Seoul has reportedly been invited to join an expanded form of the Quadrilateral Security Dialogue, a security forum composed of the United States, Japan, Australia and India, better known as Quad, but Korea has been reluctant to commit further due to its close economic ties to China.

Amid such tensions, talks are reportedly being held in the Pentagon over changing the character of the permanent U.S. military presence in places like Korea into something more rotational — an adjustment that would inevitably spell major changes to the allies’ plan for Opcon transfer in the near future.

“Opcon transfer can happen immediately if the United States decides so, but it is unlikely it will hand over command to the Korean military amid growing tensions with China,” said one military source. “This may be a challenge that Suh finds hard to resolve.”