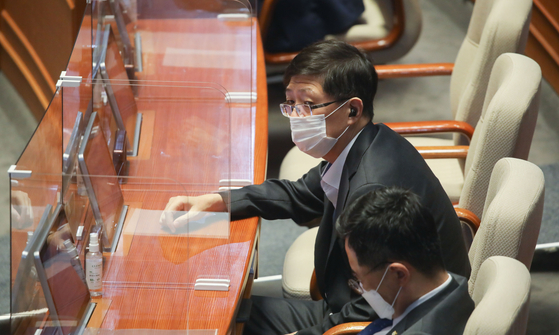 Democratic Party Rep. Kim Hong-gul is seated at the National Assembly in Yeouido, western Seoul, last Wednesday. The DP decided to expel Kim from the party Friday amid allegations that he had underreported property ownership. [YONHAP]


Rep. Kim Hong-gul, the son of late President Kim Dae-jung, has been expelled from the ruling Democratic Party (DP) over allegations he underreported property ownership and real estate speculation.

The DP Supreme Council in an emergency meeting on Friday reached a decision to expel Kim after the party’s ethics inspection body looked into allegations that the first-term proportional representative lawmaker had falsely reported property ownership and violated election law.

The party’s ethics committee on Wednesday launched an investigative body headed by DP Rep. Choi Ki-sang to probe various accusations raised against some of its lawmakers, including Kim.

Choi In-ho, a DP spokesman, said Friday the ethics inspection body requested the expulsion of Kim because he “did not sincerely cooperate with the inspectors and damaged the party’s dignity by possessing multiple properties, which is a departure from the essence of the party’s real estate policy.”

Kim owns four homes, including the residence of his late father in Donggyo-dong, western Seoul, but only declared three to the National Election Commission (NEC) ahead of the April 15 general elections, apparently omitting his Godeok-dong apartment in Gangdong District, eastern Seoul, reportedly worth over 1 billion won ($860,000).

Kim denied the allegations raised against him, saying he does not manage the wealth himself and that his wife had purchased the ownership rights to the Godeok-dong apartment.

In a statement released through his office Saturday, Kim said he takes the party’s decision to expel him with a “heavy and solemn heart,” adding he is sorry for “causing concern to the people and causing a burden for the party.”

However, Kim denied that he had been uncooperative with the inspection body and stressed, “I want to make it clear that I did not evade or refuse to cooperate with the investigation and inspection.”

The decision to expel Kim from the party that was established by his father came just two days into the probe, and seems to be an attempt at early damage control. It also is seen to reflect DP Chairman’s Lee Nak-yon’s intent for the party to strongly adhere to reform measures including its real estate policies.

DP Rep. Kim Han-jung, a former press secretary and senior aide to the late Kim Dae-jung who accompanied the former president to the first inter-Korean summit in Pyongyang in 2000, in a Facebook post Friday morning ahead of the ethics committee meeting appeared to allude to Kim Hong-gul’s upcoming expulsion.

“There is no acceptable explanation for purchasing multiple homes,” he wrote, calling on the party to reach a speedy decision.

He added, “The most worrying thing is that many people who respected and followed [former] President Kim Dae-jung and First Lady Lee Hee-ho will be disappointed and resentful. This is not a passing shower that can be avoided by waiting it out.”

Kim, the third and youngest son of the former president, joined the DP in 2016.

However, as a proportional representative lawmaker, Kim can continue to maintain his seat in the National Assembly even after being expelled from the party in accordance with the Public Official Election Act.