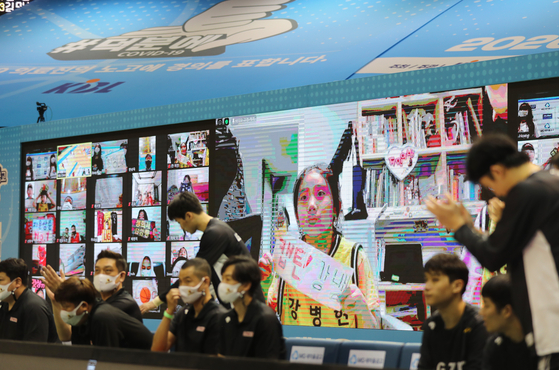 Korea added 82 new cases of the coronavirus Saturday, the first time in 38 days that the figure dropped below 100.

Health authorities announced the milestone Sunday, but in the same breath warned that the proportion of untraceable infections was reaching new highs lately, which means epidemiologists aren’t sure how and where some patients contracted the disease, heightening the risk of inadvertent transmission in local society.

Among 1,798 people who were diagnosed with the virus over the past two weeks from Sept. 6 to Saturday, 493 people, or 27.4 percent, were in this untraceable category, said the Central Disease Control Headquarters. The corresponding percentage had been steadily rising for several days until it peaked at 28.1 percent on Friday.

The government’s goal is to push untraceable infections down to below 5 percent of all new infections, like it successfully did for many days in April and May.

Health officials also remained cautious about celebrating Saturday’s breakthrough of 82 new cases, saying fewer people tend to get tested over weekends, which might have caused the significant drop.

Korea added 126 new cases Thursday and 110 on Friday. It normally takes about one or two days for a coronavirus test result to be confirmed.

The last time Korea had fewer than 100 daily new infections was when 56 new cases were reported on Aug. 12, the day that a congregant at the Sarang Jeil Church in Seongbuk District, central Seoul, was diagnosed with the virus — and soon led to the second-largest cluster of infections Korea has ever seen to date.

Daily cases at one point soared to 441 on Aug. 26. Between 100 and 200 cases had been reported prior to Saturday for over two weeks straight, irritating health officials trying to push cases down as low as possible before the Chuseok holidays begin on Sept. 30. 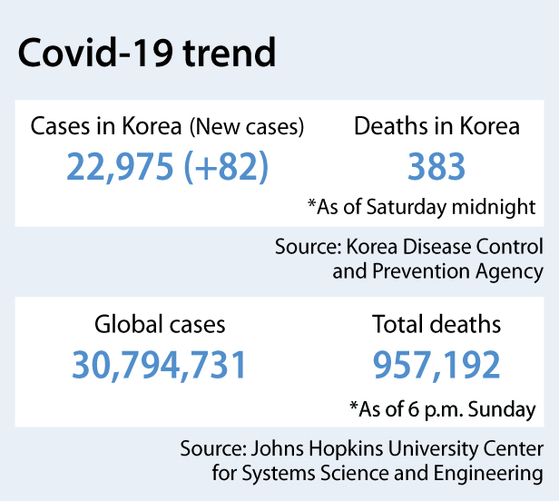 Health authorities Sunday said they expect the Chuseok holidays to pose a huge risk for another outbreak, which is why they’ve decided to extend Level 2 social distancing measures for regions outside the Seoul metropolitan area for another week until Sept. 27.

In explaining why regions outside the Seoul metropolitan area has to go through another week of Level 2 restrictions in the three-tier social distancing system, the Central Disaster and Safety Countermeasure Headquarters explained Sunday there were still too many infections sporadically popping up all over the nation, plus the fact that a big portion of them was untraceable.

The headquarters said it also factored in the fact that Chuseok is around the corner.

Health authorities have already warned that the entire nation will go through yet another set of new restrictions for two weeks from Sept. 28 in time for the holidays, the specifics of which will be revealed early this week.

As for school re-openings, in-person classes are set to resume in Seoul, Incheon and Gyeonggi on Monday for the first time in 26 days after all students except high school seniors — who are preparing for the annual College Scholastic Ability Test (CSAT) — were forced to stay home to engage in online learning.

Through Oct. 11, kindergartens, elementary and middle schools will be required to run their classrooms up to a third of their full capacities, while high schools will run up to two-thirds.

Schools outside the Seoul metropolitan area will have to follow the same guidelines during the same period, though some school districts can allow more students in classrooms after consultation with the Education Ministry.

Among Saturday’s 82 new cases, 72 were local infections, including 28 in Seoul, 24 in Gyeonggi, six in Busan, four in North Gyeongsang, three in Incheon, two in Daegu and one each in Daejeon, Ulsan, North Chungcheong, South Chungcheong and South Gyeongsang.

Out of 10 imported cases, three were from India, two from Turkey and one each from Indonesia, Iraq, Japan, Germany and the United States.

Five people died Saturday, bringing total deaths to 383, while 188 people recovered, bringing total recoveries to 20,158. As of Saturday at midnight, Korea had counted 22,975 virus patients in all.

While new clusters have been sporadically appearing in numerous parts of the nation, the Sarang Jeil Church cluster has effectively stopped growing at 1,168, the last patient of whom was diagnosed on Sept. 11.

The Seoul Metropolitan Government last Friday announced it would sue the controversial Presbyterian church and its head pastor, Rev. Jun Kwang-hoon, for indemnity worth 4.62 billion won ($4 million). The city office accused them of hampering government measures to prevent the spread of the virus by submitting fake records of its congregants and visitors, and refusing to cooperate with epidemiological efforts.