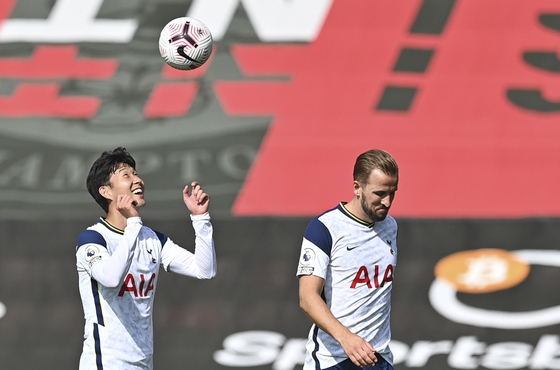 Son Heung-min, left, and Harry Kane celebrate at the end of the match between Southampton and Tottenham Hotspur at St. Mary's Stadium in Southampton on Sunday. [AP/YONHAP]


Son Heung-min of Tottenham Hotspur became the 28th player in the history of the English Premier League to score four goals in a single game on Sunday, netting four in Spurs’ dominant 5-2 victory over Southampton at St. Mary’s Stadium in Southampton, Britain.

Southampton opened the scoring with a goal from Danny Ings in the 32nd minute in the midst of a relatively quiet half for Spurs. Son’s equalizer came in the last moments of the second half, putting the score at 1-1 going into the break.

Harry Kane then added a fifth goal in the 82nd minute to give Spurs a 5-1 lead. A penalty from Ings in the 90th minute gave Southampton one consolation goal to end the game at 5-2.

Son is the 28th player ever to score four goals in the Premier League era, joining the venerable company of Premier League legends such as Alan Shearer, Michael Owen and Thierry Henry, and more recently Luis Suarez, Sergio Aguero and Spurs’ own Kane. Son is the only Korean footballer to ever achieve the feat.

Son wasn’t the only Spurs player to enter the history books during Saturday’s game. With four assists, one for every one of Son’s goals, Kane became the seventh player ever to pick up four assists in an EPL game.