Retail companies are lending a helping hand to farmers struggling as the combination of the coronavirus and an unseasonable summer followed by a spate of typhoons caused both plummeting commercial sales and a sudden lack of produce ahead of the holiday season.

To help boost sales, retailers are promoting produce that is not normally in high demand, offering inventive recipes and promotions focused on less-popular items. 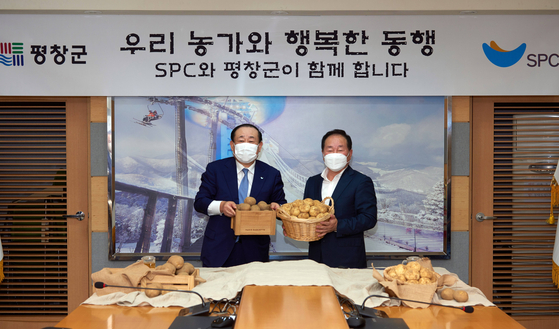 The idea is to help potato farmers in the region struggling to stay afloat as school cafeterias — considered their major customers — closed due to social distancing measures.

SPC will use Pyeongchang potatoes to develop bakery products at Paris Baguette stores and a new ice cream flavor at its Baskin Robbins 31 chains.

Discount retailers have also rolled up their sleeves to help struggling farmers by purchasing produce damaged by the typhoons and offering it at discounted prices. 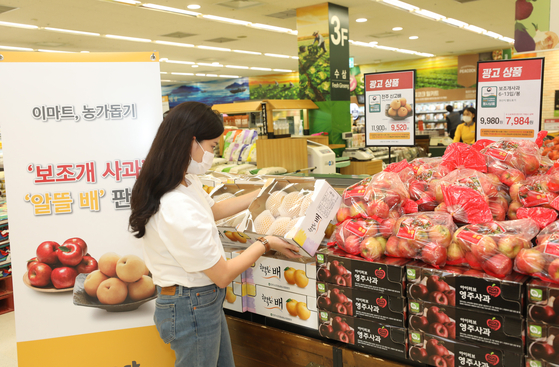 A customer examines a box of imperfect pears at an Emart store in Seongsu-dong, eastern Seoul, on Sept. 17. [EMART]


Discount chain Emart purchased 360 tons of imperfect apples and pears and made them available at a discounted price ahead of the Chuseok holidays. Imperfect produce is fruit or vegetables equal in quality but not as attractive as their more sellable counterparts.

“We decided to increase sales of ugly fruit as produce supplies plummeted to alarming levels due to the abnormal weather conditions that hit farms since early this year. We hope to help struggling farms as well as contribute to stabilizing prices for ordinary customers,” said Lee Myoung-geun, manager of fresh produce at Emart.

Pear prices also increased as many farms were flooded during the typhoons last month. Fifteen kilograms of pears were traded at 63,175 won in the wholesale market on Monday, almost double the wholesale price in 2019.

E-commerce platforms are using their networks to directly connect farmers with customers. Kakao Commerce, a live commerce app from Kakao, partnered with Korea Post to sell regional produce through the postal service’s KakaoTalk channel through the end of October.

Produce harvested in the southwest of the country and Jeju Island is currently being sold on the platform. Produce from North Chungcheong is scheduled to be made available on Oct. 16.

“We plan to expand our partnership with regional governments so that we can help expand distribution channels for producers and provide an affordable shopping experience for customers,” said an official from Kakao Commerce.

[WORD_ON_THE_WEB] 'The prices are almost unbearable'