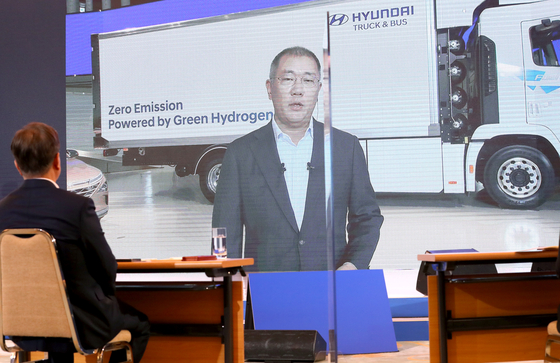 
Investors are bullish on Hyundai Motor and its affiliates, betting that the group's sales will recover from the Covid-19 pandemic.

Hyundai Motor shares closed at 185,000 won ($159) Monday, up 2.21 percent from the previous trading day. That's a whopping 180 percent increase over March when the shares hit a low for the year of 65,900 won due to coronavirus jitters. It is 56 percent higher than in January, when the market had yet to be rattled by the coronavirus. 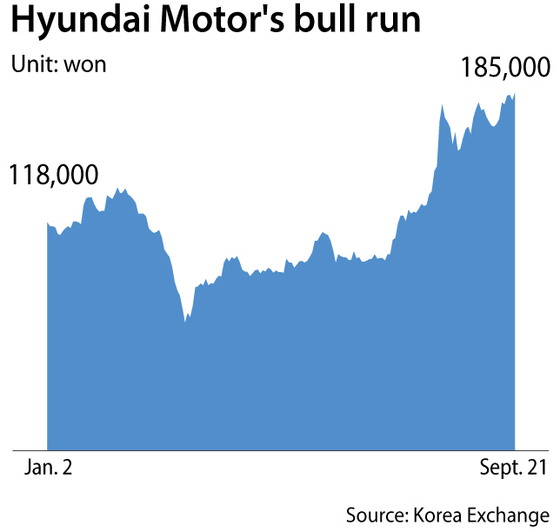 It recovered its sixth rank after being pushed to No. 11 in May when internet companies including Kakao and Naver were hot and manufacturing companies not.

Investors are equally keen on 11 other publicly traded affiliates of the group including the smaller carmaker Kia Motors and parts maker Hyundai Mobis.

The combined market capitalization of Hyundai Motor and its 11 affiliates surpassed 100 trillion won, according to the Korea Exchange Monday, for the first time in 28 months. Its market cap was 100.2 trillion won Monday, a 121.5 percent increase compared to March.

“Stable domestic sales and a recovery in earnings after Covid-19 have lead to a bullish stock price of Hyundai Motor,” said Kwon Soon-woo, an auto analyst at SK Securities.

“New momentum in its hydrogen-powered vehicles also factored in.”

Hyundai Motor is launching a number of models soon, including a fully revamped Tucson SUV and a brand new GV70 SUV from its premium Genesis brand.

In its latest conference call with analysts, Hyundai Motor said it will sell hydrogen trucks in the United States within the next two years. It also said it would expand the production of hydrogen-fueled vehicles to 40,000 units next year from the current 11,000 units. That figure will expand to 500,000 units by 2030, the carmaker said.

Brokerage houses are raising their target prices for the auto company's stock.