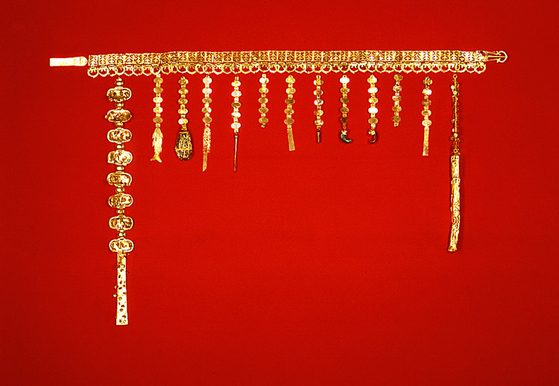 A belt made of cloth is called a gwadae.

Attached to the belt are rectangular forms made of metal.

This Korean gwadae influenced by China is decorated with valuable objects such as jadeite and commodities such as a small knife, a case for drugs, a whetstone, a flint and tweezers.

According to lessons of formality called Yegi from China, when people performed ancestral rites, they should have a towel, a grindstone, a small cup and an iron flint on the left side of their belt.

On the right side are a set of bone instruments called gyeol (worn on the thumb and used in archery), an instrument called gwan which is used to suspend strings on a bow (in archery) and a large cup.

The color, number and material of it represented the wearer's government position in the Baekje (18 B.C. to 660 A.D.) and Silla Dynasty.

Exhumed from the North Tomb of Hwangnam-dong in Gyeongju, North Gyeongsang, the golden gwadae is 125 centimeters (49 inches) in length and the yopae which is worn with the gwadae, is 22.5 to 73.5 centimeters in length.

The gwadae is ornamented with 44 rectangular forms made out of metal and has nine holes around it for linking leather or metal rings.

The yopae is another ornament with 13 ropes in the shape of an ellipse and quadrangle.

Both the gwadae and yopae were found fastened around the waist of the tomb's occupant.