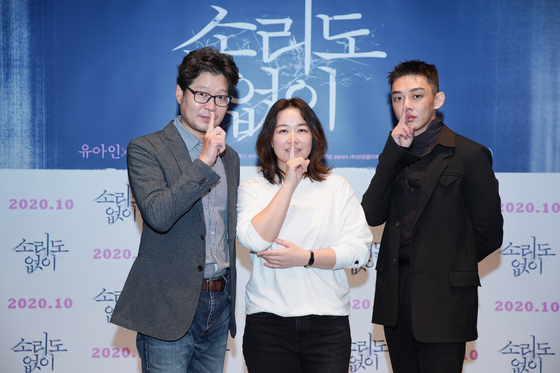 From left, actor Yoo Jae-myung, director Hong Eu-jung and actor Yoo Ah-in pose for the camera at an online press event on Monday to promote their upcoming film "Voice of Silence." [ACEMAKER MOVIEWORKS]


In their upcoming crime film “Voice of Silence,” lead actors Yoo Ah-in and Yoo Jae-myung promise it’s going to be unlike any other crime film, in the sense that their characters are not evil, but are more or less ordinary people doing their jobs like everyone else.

In the movie, both actors play subcontractors employed by hit men to clean up the bodies.

“On the outside, they’re the bad guys, criminals,” Yoo said at an online press event on Monday. “But Tae-in [played by Yoo Ah-in] is described as a silent, diligent person who completes the tasks that’s given before him — there’s no malice in his actions. [His personality and his job] in a way balance each other out, and it makes the viewers refrain from making a moralistic judgment of him. Through the character, it makes people question what is supposed to be a ‘good’ life, the distinction between the good and the evil that [we have] created and what stories lie beneath the surface of what the world judges to be evil and cruel.”

For this role, Yoo not only gained 15 kilograms (33 pounds), but also stars in his first role free of dialogue.

“Seeing that Tae-in can still make some form of sounds, I don’t think he’s completely speech-impaired,” Yoo said. “Due to some kind of hardship that he went through in his past, he’s someone who refuses to express himself to the world — he refuses to be and stay connected, and reveal himself. [To act without dialogue] was both comfortable and a challenge for me.”

“Chang-bok, on the other hand, is an excessive talker,” Yoo Jae-myung said, introducing his character. “He’s actually very nice — and thinks that he has been blessed to earn his livelihood and to have a roof over their heads. He just believes that ‘burying bodies’ is part of his job, and wants to do it as best as he could. He’s very religious and frugal.”

The story really begins as the duo unintentionally become kidnappers when their client is murdered while they are employed to abduct an 11-year-old girl Cho-hee.

“I tried to put a lot of metaphors into the character of Cho-hee,” director Hong Eu-jung said. “I hope that the audience can see that as well. As for now, she should [still be] kept under the veil.”

“I was in awe,” the actor said. “[Hong] has the talent to take [a narrative] that is very unique and mix it up with mundane factors — things that really feel like it could happen in our everyday lives — to stimulate our minds and [ask questions] that have never been discussed before. I strongly believe that Hong is set to become a great filmmaker.”

“There’s always a feeling of anticipation when the actor receives a script, curious to find out what kind of story it is,” Yoo Jae-myung said. “When I read ‘Voice of Silence,’ it was a strange experience — like the title, the story was colorful and rich without a sound. The metaphors were strong, to the point, and the overall narrative was intense but to the point as well.”

“It’s also very contemporary,” Yoo Ah-in added. “We come across so many news and stories, and people question what stance they should take in such a matter — about what’s right and wrong, what’s good and bad. The film also asks the world what defines the standards. It’s got a voice.”

The film is set to premiere next month.