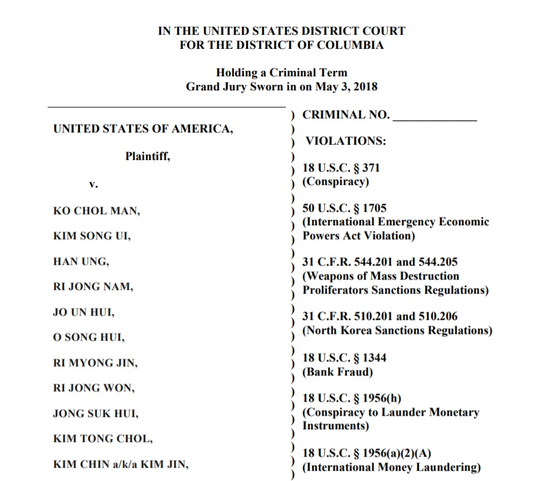 A screenshot of a U.S. Justice Department indictment from May of dozens of North Korean bankers accused of laundering money for the regime. [SCREEN CAPTURE]

The findings follow a massive leak of documents from the U.S. Treasury Department’s Financial Crimes Enforcement Network, also known as FinCEN, which were obtained by Buzzfeed News and subsequently became part of a collaborative project with the International Consortium of Investigative Journalists (ICIJ), Buzzfeed News and over 400 journalists across the globe.

The documents revealed an elaborate series of suspicious activities flagged by banks that showed $174.8 million had been laundered for Pyongyang mainly throughout 2008 to 2017, when the regime was subject to a restrictive set of financial sanctions imposed by the United States as a result of its nuclear and missile programs, NBC News reported.

Key to the North Korean methods of penetrating global financial networks while evading sanctions was the role played by Chinese companies, the report said, underscoring the difficulty faced by U.S. compliance officials in detecting such schemes.

One prominent example highlighted in the report involved Chinese businesswoman Ma Xiaohong, who has been accused by U.S. prosecutors of using her Dandong Hongxiang Industrial Development Corp. to help Pyongyang launder its foreign earnings.

According to some of the bank documents, Ma and her company funneled money through various layers of shell companies in several countries, including China and Singapore, and through U.S. banks in New York.


A report filed by JPMorgan showed the bank was used in the transfer of some $89.2 million between 2011 to 2013, involving companies and individuals associated with North Korea.

Such moves testify to just how far-reaching the regime’s money-making operations have been, cleverly carried out under sanctions in what the NBC report termed "a cat and mouse game" with the United States.

In 2005, the United States famously sanctioned one of these operations through the Banco Delta Asia, singling the bank out among many others in Macau that handled North Korean money in order to set an example for other banks.

The move sparked a political dispute between Washington and Pyongyang that eventually allowed the latter to regain access to its funds at the bank after the issue was brought to the then-active Six Party Talks.

But the case effectively made Macau a less alluring destination for North Korean laundering schemes, after the city enforced stricter antilaundering guidelines in the wake of the incident.

Pyongyang has also been resorting to the cybersphere as a source to generate foreign currency for its leaders. In March, Washington indicted several Chinese citizens for allegedly helping the North launder some $100 million in stolen cryptocurrency, some of which was taken from a South Korean cryptocurrency exchange in 2018.

And the U.S. Department of Justice in May filed another indictment against 28 North Korean and five Chinese bankers accused of laundering and transferring some $2.5 billion to Pyongyang’s Foreign Trade Bank through covert branches in places like China, Russia, Thailand, Libya and Kuwait.

The transactions were believed to have taken place throughout much of the time sanctions were in place over the last decade, as late as January this year, according to the Justice Department.