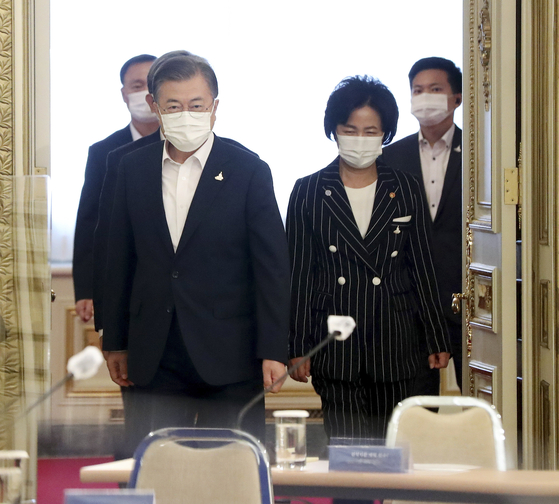 
President Moon Jae-in on Monday hosted a strategy meeting to reform the country's powerful law enforcement authorities, including the prosecution, and urged top members of his administration and the ruling party to complete the changes.

Moon hosted the strategy session on the reform of the National Intelligence Service (NIS), prosecution and police at the Blue House for the first time in more than a year and a half. Among the participants were Justice Minister Choo Mi-ae, Interior and Safety Minister Chin Young and NIS Director Park Jie-won. Prosecutor General Yoon Seok-youl was not invited to the meeting.

Moon has promised to end the NIS’s decades-long practice of intervening in domestic politics, decentralize powers of the prosecution and hand some of the investigative authorities to the police. In his opening remarks, Moon urged the officials to put all their efforts toward completing the reforms. He also urged the government and the ruling Democratic Party (DP) to work together to pass relevant laws to ensure the planned changes will be systemized.

He also urged the administration and the ruling party to persuade opposition lawmakers to launch a new investigative agency for senior officials as soon as possible. The Corruption Investigation Office For High-Ranking Officials (CIO) was supposed to launch before July 15, but the opening was delayed as the main opposition People Power Party (PPP) refused to form a nomination committee for its head.

Speculation was high about the conspicuous timing of the event, as it was the first time since February 2019 that Moon decided to listen to the progress of reform from top officials. The meeting notably took place amid snowballing allegations that Justice Minister Choo’s son had received special treatment when he was serving the military in 2017.

The prosecution has been investigating those allegations for eight months, and is expected to announce the outcome as early as this week.

It appeared that Moon was displaying support for his justice minister on Monday, when he entered the event accompanied by Choo. Before the strategy session started at 2 p.m., most participants sat in their seats and waited for the president’s entry for about five minutes. Moon entered the room with Choo and Presidential Chief of Staff Noh Young-min.

Law community insiders, particularly prosecutors, said the timing of the meeting is too political.

“It seems that Moon wants to use the event to display his support for Choo,” a senior prosecutor told the JoongAng Ilbo. “The Seoul Eastern District Prosecutors’ Office, which has to make a decision on whether it must indict Choo’s son or not, will feel pressure.”

“There is no special or urgent issue, but the Blue House abruptly called for this meeting,” added a senior official from the prosecution. “It made us wonder about the intention.”

The Blue House dismissed the speculation.

“Please don’t link the strategy session with what’s going on outside,” a senior presidential aide told the reporters. “See this as an event to secure the momentum to further push forward the reform.”

Since taking office in January, Choo has pushed forward strong reform measures, including a series of reshuffles of prosecutors to weaken their established hierarchy. Her moves faced resistance from the prosecutors and prompted hundreds of thousands of people to sign petitions to the president to dismiss her. The Blue House replied earlier this month that Moon supports Choo.

It was not the first time that a Blue House event faced criticism for its political overtones. In September last year, Moon made the rare decision to hold a cabinet meeting at the Korea Institute of Science and Technology (KIST).

At the time, Choo’s predecessor, Justice Minister Cho Kuk, was facing a scandal related to his daughter’s alleged academic fraud. While Cho’s daughter was suspected of having used a fake internship certificate from the KIST for her graduate school admission, Moon hosted the cabinet meeting at the institute, fueling speculation that the president was trying to publicly convey his support for Cho.