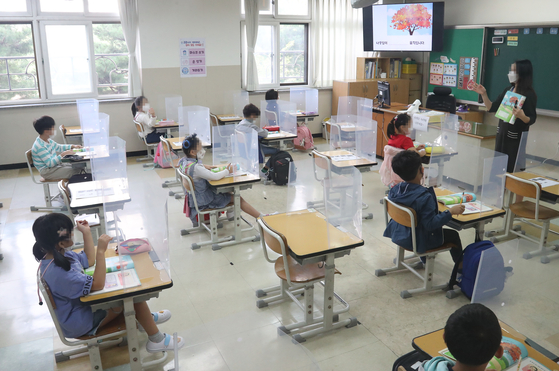 First graders at Wonil Elementary School in Suwon, Gyeonggi, return to their classroom Monday for the first time in nearly a month. Wonil was among some 7,000 schools in the greater Seoul area that were allowed to reopen Monday. [YONHAP]

Schools in the greater Seoul area reopened Monday for the first time in nearly a month, as the daily toll of coronavirus cases sunk to 70.

Health authorities announced Monday that Korea added 70 new infections of the virus Sunday, the second day in a row that the day-to-day figure remained below 100. There were 82 new cases Saturday.

Since Aug. 26, after an infection cluster at the Sarang Jeil Church in Seongbuk District, central Seoul, began to swell, students in kindergartens, elementary, middle and high schools in Seoul, Incheon and Gyeonggi had been forced to take classes remotely from home.

High school seniors were spared from the remote lessons as they had to prepare for the annual College Scholastic Ability Test (CSAT) slated for December. They were allowed back to classrooms at the start of the semester in May.

The Ministry of Education announced on Sept. 15 — soon after the central government lifted the so-called Level 2.5 social distancing measures for the Seoul metropolitan area — that schools in the region would reopen again on Monday for the first time in 26 days, albeit with restrictions.

Through Oct. 11, kindergartens, elementary and middle schools will be allowed to run up to a third of their capacities to guarantee social distancing, while high schools can run up to two-thirds. 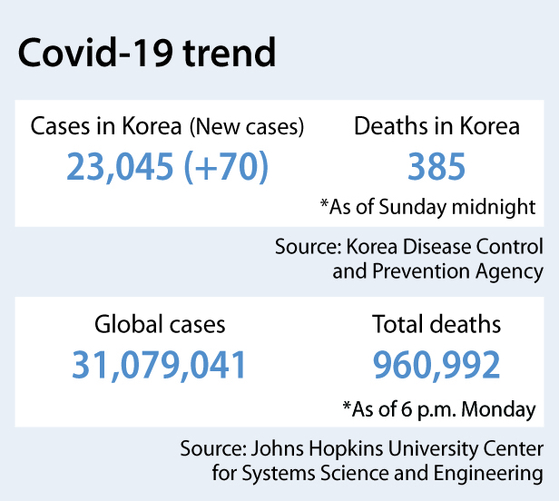 Schools outside the Seoul metropolitan area have been ordered to follow the same guidelines from Monday to Oct. 11, though some school districts can allow more students in classrooms after consultation with the Education Ministry.

A 17-year-old high school student in Yeongdeungpo District, western Seoul, said Monday he was glad to be back.

“I was wearing short sleeves the last time I came to school, but now I’m wearing long sleeves,” he said.

“The school year is about to end, but sadly I didn’t have a chance to bond with my classmates and teachers due to the pandemic.”

Kim Mi-yeoung, 37, who has a child in second grade, says she, too, was relieved schools reopened.

“I’m not entirely comfortable about the risk of my child getting infected at school, but I think there are certain things that children can only learn by physically going to school and mingling with other kids,” she said.

Whether schools will remain open after Oct. 11 will all come down to the upcoming Chuseok holidays, which start on Sept. 30.

Health authorities have already warned that the entire nation will go through yet another set of restrictions for two weeks from Sept. 28 in time for Chuseok, the specifics of which will be revealed Friday.

Yoon Tae-ho, an official at the Central Disaster Management Headquarters, said in a Monday press briefing that daily new cases of infection were definitely falling thanks to the public’s compliance with social distancing measures, but warned that untraceable infections remain above 20 percent of all new cases. That means epidemiologists aren’t sure how or where those people got infected, which raises the odds they might have unwittingly spread the virus to others.

Health authorities Monday also raised the possibility of Korea’s first case of reinfection, though further study was needed to confirm it. Officials said there were only five reported cases of reinfection globally.

Korea’s suspected reinfection patient was identified as a woman in her 20s who lives in Seoul and initially got infected last March. According to health officials, she was hospitalized and recovered later that month, and was discharged. But a week later, a cold came on, and she tested positive for the virus again.

How she got infected on both occasions was not revealed, but officials said it appears she was infected with two different strains of the coronavirus, among seven main strains that have been reported to the World Health Organization (WHO).

Among 70 people in Korea who were diagnosed with the coronavirus Sunday, 55 were local infections: 21 in Seoul, 18 in Gyeonggi, eight in Busan, two each in Daejeon, North Chungcheong and South Gyeongsang, and one each in Incheon and North Gyeongsang.

Out of 15 imported cases, four were from the Philippines, three each from India and Turkey, and one each from Indonesia, Russia, Kyrgyzstan, Japan and Australia.

Two people died Sunday, bringing total deaths to 385, while 90 people recovered, raising total recoveries to 20,248. As of Sunday at midnight, Korea had counted 23,045 coronavirus patients in all.