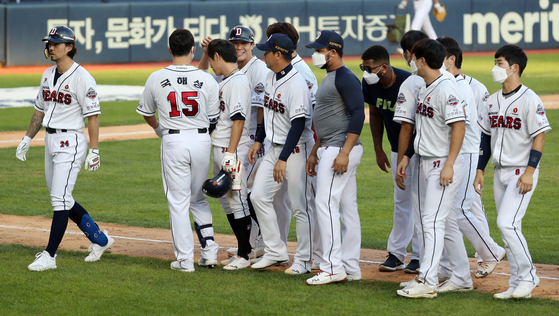 The Doosan Bears celebrate after picking up a 6-5 come-from-behind victory against the LG Twins at Jamsil Baseball Stadium in southern Seoul on Sunday. [NEWS1]


The Doosan Bears' dominance of the KBO appears to be well and truly over, at least for the rest of this season.

However, in the delayed 2020 season, the Bears are not looking too good. With the Jamsil Derby taking place over the weekend, the Bears slipped as low as sixth place after losing the first game to the LG Twins 9-6.

Thanks to a 6-5 come-from-behind victory on Sunday, the Bears moved back up a spot to fifth, the last postseason spot. This was a long-awaited victory for the Bears as they were wallowing in a four-game losing streak. 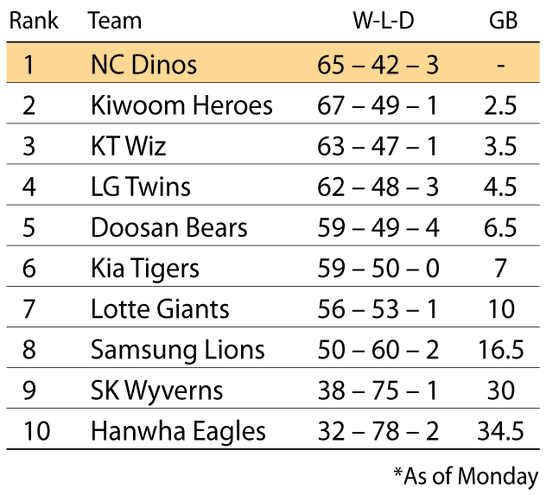 Looking at the Bears’ roster this season, there aren’t any major changes compared to their championship roster last season, with the notable exception of ace pitcher Josh Lindblom. The absence and struggles of veterans due to injuries have also been crucial.

Ahead of this season, the Bears lost Lindblom as he headed back to the major league right after winning the 2019 Korean Series. While the Bears have traditionally been very good at plugging holes in their batting line-up, pitching has often been a struggle.

This season is no exception.

Along with the absence of Lindblom, the Bears also lack 2019 closer Lee Hyeong-beom, who is out with an injury. Due to this, manager Kim Tae-hyung made an interesting decision midway through the season, where he decided to switch the positions of two pitchers — starter Lee Young-ha and closer Ham Deok-ju.

The Bears’ long-standing captain Oh Jae-won may have earned Kim’s trust despite his poor performance, but as his struggle continued this season, Kim decided to pass the role on to Oh Jae-il.

It didn't seem to make much difference.

As of Monday, the Bears are ranked fifth in the regular season standing with 59 wins, four draws and 49 losses. They are a full two games behind the fourth-ranked Twins and only 0.5 games ahead of the sixth-ranked Kia Tigers.

Since the teams have less than 40 games remaining until the end of the regular season with a demanding schedule ahead of them including double headers and Monday games, little mistakes could push the Bears out of the postseason race.

Looking toward the top of the regular season standing, the KT Wiz are causing a bit of an upset. Currently on a five-game winning streak as of Monday, the Wiz moved up to third in the regular season standing with 63 wins, one draw and 47 losses. They are only one game behind the second-ranked Kiwoom Heroes and 3.5 games behind the top-ranked NC Dinos.

The Wiz’s position in the regular standing is unexpected, as they started the season very poorly. Up until June 30, the Wiz were not even close to earning a postseason spot as they were ranked eighth in the league with 11.5 games behind the top-ranked Dinos. In fact, the Wiz have never qualified for the playoffs.

But starting in July, they started climbing slowly through the ranks and are now sitting comfortably at third.

Elsewhere over the weekend, the Dinos got some breathing room by picking up wins in both games of their double header against the Lotte Giants on Sunday. After Saturday’s game, where the Dinos lost to the Giants 5-1, they were barely holding onto their lead, just a game ahead of the Heroes. Thanks to that double header, the Changwon club managed to extend their lead to 2.5 games.

Although the Giants have a very slim chance of earning a spot in the postseason, their 2020 season hasn't been terrible. Currently sitting at seventh, the Giants still have a winning percentage above 0.500.


Normally, only the top five teams have a winning percentage above 0.500, so that threshold tends to be a major goal for the manager and coaching staff each season. This year, the performance of the lowest-ranked teams has been bad enough to leave the 0.500 door open for the top seven teams.