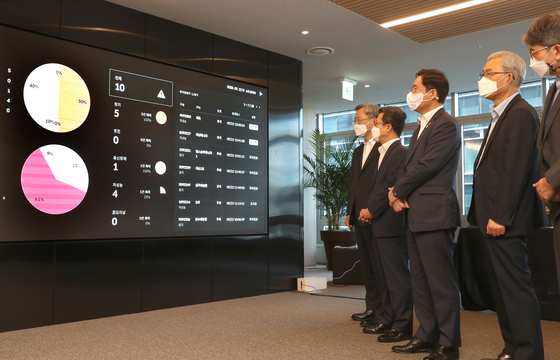 
The number of energy-related start-ups will be increased to 4,000 under a government plan that will focus on six sectors.

On Tuesday, the Ministry of Trade, Industry and Energy laid out a support strategy on innovative energy companies as part of the Moon Jae-in government's Green New Deal.

The research and development (R&D) will be focused on operating and management platforms as well a data system that will monitor deficient solar panels in real-time.

On wind power, the government plans to increase the participation of innovative energy companies in major wind farms.

Additionally, it said it will increase the R&D budget on developing an operating and management platform as well as a smart-turbine control system from 30 billion won this year to 50 billion won by 2025.

The government said by 2022 it will invest 6.9 billion won in creating an EV battery-testing site on Jeju Island. It will also create a platform that will collect and analyze data on EV batteries conducted by the state-financed Korea Electronics Technology Institute.

The government also plans to spend 45 billion won by 2025, up from 22.5 billion won, on R&D in materials, parts and equipment related to renewable energy, including smart inverters for solar panels and floating devices for wind power smart sensors.

In addition to the development, the government will also provide financial and marketing support for the energy-innovative start-ups.

As of last year, the number of energy-innovative companies was 2,029, whose total revenue as of 2018 amounted to 9.69 billion won.

The annual average revenue increase is 9.4 percent, with an operating profit ratio of 4.6 percent.

The government estimated that when the number of such companies increases to 4,000 by 2025, the number of people employed will increase from 35,000 as of last year to 95,000.

“Innovative companies in energy equipped with new technologies and ideas will bring about innovation in the energy industry in a time of paradigm shift represented through decarbonization, decentralization and digitalization,” said Minister of Trade, Industry and Energy Sung Yun-mo.