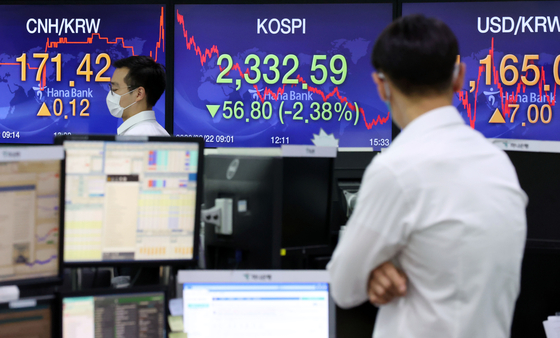 A screen shows the closing figure for the Kospi in a trading room at Hana Bank in Jung District, central Seoul, on Tuesday. [YONHAP]


Stocks dipped more than 2 percent on Tuesday, as investor sentiment worsened over dimming hopes for recovery from the coronavirus pandemic in major economies. The won fell against the dollar.

Trading volume was high at about 1 billion shares worth some 17.5 trillion won ($15 billion), with losers outnumbering gainers 816 to 80.

The Kospi plunged after losing nearly 1 percent in the previous session.

The decline is largely blamed on strong foreign and institutional sell-off, driven by slow progress in U.S. stimulus talks and fears of economic lockdown in Europe, analysts said.

"Fears of possible lockdown in Europe and the stalled [U.S.] stimulus talks seem to have worsened the tech valuation problem at home," Choi Yoo-joon, a researcher at Shinhan Financial Investment, said.

In a related move, former Food and Drug Administration Commissioner Scott Gottlieb said the United States may experience "at least one more cycle" of the virus by the end of the year.

The Kospi's fall was further accelerated by investors' profit-taking before the Chuseok holiday, from Sept. 30 to Oct. 4, when U.S. political uncertainties are expected to rise, local analysts said.

The local currency closed at 1,165 won per dollar, up 7 won from the previous session's close.