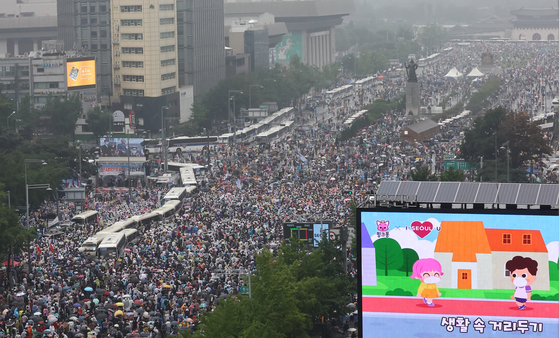 President Moon Jae-in Tuesday threatened to use “stern measures” against protesters planning to take the streets over the upcoming holidays, saying authorities will show zero tolerance toward anyone who attempts to wreak havoc on society.

Moon made the remarks while presiding over a cabinet meeting at the Blue House eight days before the Chuseok holidays, which kick off on Sept. 30, and 11 days before Foundation Day on Oct. 3.

Hundreds of right-wing civic groups have relayed plans to protest in downtown Seoul on Foundation Day, a national holiday, despite warnings from health officials and police not to congregate for fear of spreading the coronavirus.

A huge anti-Moon rally that was held in Gwanghwamun, central Seoul, on Aug. 15 Liberation Day has often been mentioned as a dire reference point: At least 622 coronavirus patients have been linked to the rally as of Tuesday noon, and the cluster is still growing. 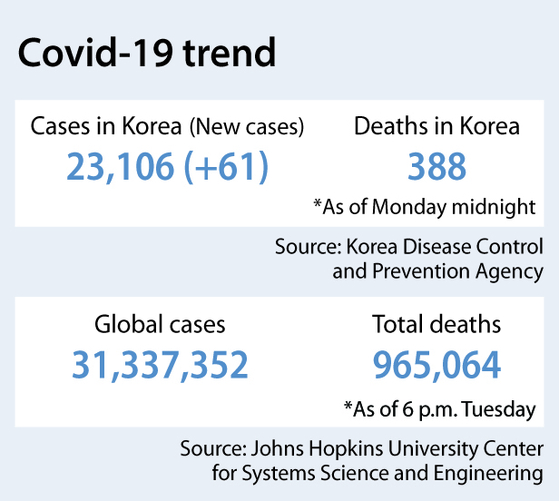 Nationwide, Korea added 61 new cases Monday, the third day in a row that the day-to-day figure remained below 100, the Korea Disease Control and Prevention Agency (KDCA) said Tuesday morning. There were 82 new cases Saturday and 70 on Sunday.

By law, it’s illegal to rally in large numbers in Seoul under the Seoul Metropolitan Government's ban on any congregations involving 10 or more people through Oct. 11. Police warned they would arrest anyone who participates in rallies exceeding that limit.

Moon on Tuesday disparaged protesters who have refused to walk back their plans to protest on Oct. 3, saying such “antisocial crimes” cannot be supported under the pretext of freedom of assembly and freedom of speech when they “threaten the safety of the community and crush the lives” of members in society.

Ruling Democratic Party (DP) Chairman Lee Nak-yon called on Korea’s police chief, Commissioner General Kim Chang-yong, during a Tuesday meeting to block any efforts from protesters to hold rallies in the coming days, and to "show that governmental authority is alive.”

Kim replied that the possibility of the coronavirus spreading between protesters was “real,” as seen in the Aug. 15 rally, and stressed that police would block anyone who tries to demonstrate in large groups “from the point they start to congregate.”

“If they refuse to follow [our] orders to disperse, we will disperse them ourselves,” Kim warned, adding legal charges will definitely be pressed “without any exception.”

Former Reps. Kim Jin-tae and Min Kyung-wook, both of whom were members of the United Future Party — the predecessor of the main opposition People Power Party (PPP) — and participated in the Aug. 15 anti-Moon rally, suggested having demonstrators drive their cars out onto the street to protest from their vehicles. Whether right-wing groups will pick up on that idea remains to be seen.

Among 61 people who were diagnosed with the coronavirus Monday, according to data from the KDCA, 51 were local cases: 20 in Seoul, 14 in Gyeonggi, five in Busan, four in North Gyeongsang, two each in Incheon, Gangwon and North Chungcheong and one each in Ulsan and South Gyeongsang.

Ten people were believed to have contracted the virus abroad: four in the United States, two each in Uzbekistan and India and one each in Russia and Turkey.

Three people died Monday, bringing total deaths to 388, while 193 people recovered, bringing total recoveries to 20,441. As of Monday at midnight, there were 23,106 coronavirus patients in all.

Who wants a socially-distanced wedding anyway?