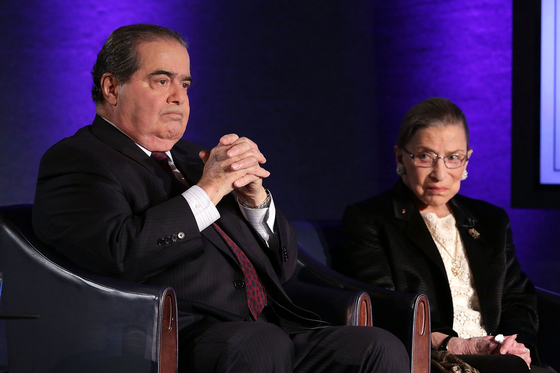 PARK HYUN-YOUNG
The author is a Washington correspondent of the JoongAng Ilbo.

The Virginia Military Institute (VMI), a public university that only accepted male students for 157 years, opened admission to female students following a landmark Supreme Court decision in 1996. Then, in her third year on the bench, Justice Ruth Bader Ginsburg wrote for the majority, “The Court has repeatedly recognized that neither federal nor state government acts compatibly with the equal protection principle when a law or official policy denies to women, simply because they are women, full citizenship stature — equal opportunity to aspire, achieve, participate in and contribute to society based on their individual talents and capacities.”

Justice Clarence Thomas recused himself as his son was enrolled at the VMI at the time. In the 7-1 ruling on the United States vs. Virginia case, the lone dissent was Justice Antonin Scalia. “The tradition of having government-funded military schools for men is as well rooted in the traditions of this country as the tradition of sending only men into military combat. The people may decide to change the one tradition, like the other, through democratic processes; but the assertion that either tradition has been unconstitutional through the centuries is not law, but politics smuggled into law,” he wrote.

Justice Ginsburg, a firm liberal, and Justice Scalia, a conservative to the core, made extremely different decisions. As an originalist, Scalia believed that the Constitution should be interpreted according to the authors’ intent. Ginsburg thought the Constitution was a living document and that interpretation should change with the times. With over 22 years working together as Chief Justices, they were rarely on the same side on controversial issues like abortion, same-sex marriage and health care.

But they were close friends. Since the 1980s, the two families had New Year’s Eve dinner at Ginsburg’s home every year and celebrated the New Year together. An opera was made after the two, they made cameo appearances, travelled and went shopping together.

On their friendship, Justice Scalia said in 2014, “I attack ideas. I don’t attack people.” Looking at Ginsburg on his side, he joked, “Some very good people have some very bad ideas.” As Scalia was writing the dissent, he shared the draft with Ginsburg so that she could write the majority decision by supplementing weakness and reinforcing the argument. The sense of mission to be faithful to their duty kept them together.

Koreans are used to taking a side, attacking the other side and viewing all issues through political ideologies. Perhaps we attack people because we lack ideas for argument. In the age of political division and unconcealed hostility, the two justices showed how to live with their differences.