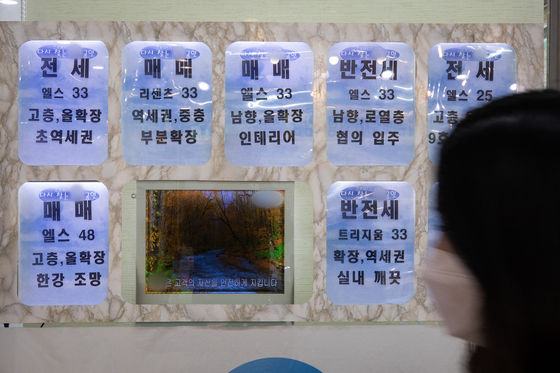 Postings on the window of a real estate agency in downtown Seoul show the apartment offerings in the area. The Korea Appraisal Board reported in August a 57 percent decrease in apartment transactions compared to July. [NEWS 1]


Affordable housing in Seoul is on a decline since the beginning of the Moon Jae-in administration, an opposition politician claims.

According to analysis by Rep. Kim Sang-hoon of the Korea Appraisal Board, the share of all apartments priced 600 million won ($515,388) or below is now less than the share of those priced above 900 million won, the exact opposite of the situation before the Moon administration started.

When the administration took office in May 2017, 67 percent of Seoul’s apartments were priced 600 million won or less. As of June 2020, only 29 percent of all apartments in Seoul were in that price range. Meanwhile, the ratio of apartments priced above 900 million won has increased from 15 percent to 39 percent over the three-year period.

Due to this trend, it has become increasingly challenging to find reasonably-priced apartments in neighborhoods known for affordable options. Only 8 percent of apartments in Gangdong District in eastern Seoul are below the 600 million-won mark. The percentage below 600 million won in Seongbuk District, central Seoul, dropped from 97 percent to 33 percent. Staggering drops were also reported in Dongdaemun, Seodaemun, Eunpyeong and Gwanak districts.

The average price of apartments in Gangdong District in eastern Seoul was 14.46 million won per 3.3 square meters (35.5 square feet) in May 2017, but at the end of July, the value was 24 million won. This is a 66 percent increase over a three-year period. The increase was high for Dongdaemun, Seodaemun, Eunpyeong and Gwanak districts.

Gangseo, Seongbuk, Guro, Eunpyeong and Geumcheon districts rarely had apartments priced above 900 million won in 2017. Nowadays, 10 percent of apartments in those neighborhoods are above that level. Increases were also reported in Seongdong, Jung, Dongjak and Gwangjin.

In the Gangnam region, which refers to three districts south of the Han River — Gangnam, Seocho and Songpa — and is a target of the government's war on real estate, apartments above 1.5 billion won are on the rise.

In the real estate market, there is criticism that the 23 sets of real estate measures have negatively impacted the lives of the middle-class population.

“The government’s real estate measures began by targeting Gangnam’s housing prices, and a ‘balloon effect’ emerged from the efforts to rein in the apartment prices in Gangnam, resulting in price increase,” said Kang Chang-deok, a professor in the urban planning and real estate department at Chung-Ang University. “The government needs to make a move to stabilize the housing market for the middle-class population, and it needs to consider whether targeting prices in Gangnam is the right method for stabilization.”

“The premature real estate policies have made climbing the property ladder for those with no homes impossible, and given tax bombs to those who already own homes,” said Kim.