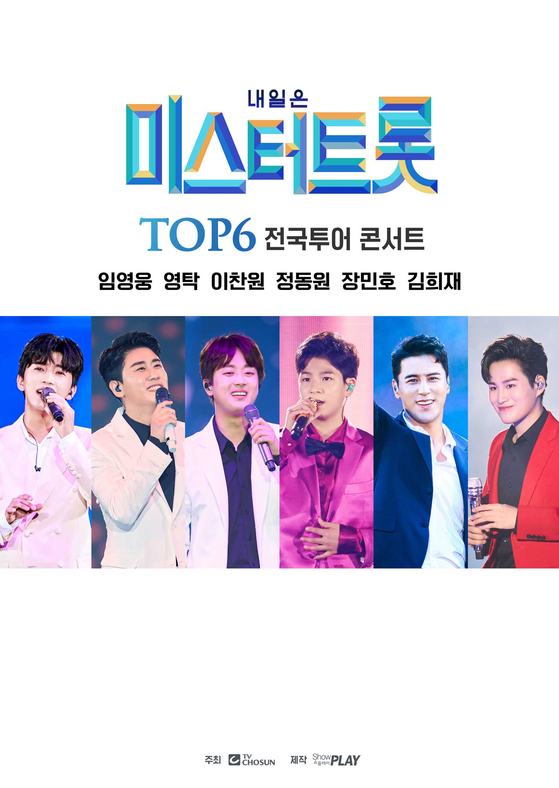 
The popular “Mr. Trot” tour was canceled midway due to the coronavirus pandemic and will resume with a new name, “Tomorrow Mr. Trot Top 6 Tour Concert.”

From Oct. 30, the concert will tour across the country, starting in Busan, and stop at cities including Gwangju, Seoul, Gangneung (Gangwon), Daegu, Incheon, Cheongju (North Chungcheong), Goyang and Suwon (both Gyeonggi).

The top six singers will take the stage for all the concerts while the other 12 contestants will take turns to appear at venues in different cities as special guests.

The initial “Mr. Trot” concert was to kick off in May but was delayed to August following the Covid-19 outbreak.

After 10 concerts in August, which took place under preventive measures at the Olympic Park in eastern Seoul, the tour was halted due to another spike in the number of Covid-19 cases in the country. Tickets for all the stops sold out as soon as they went on sale.

The dates on which tickets will go on sale for the upcoming “Tomorrow Mr. Trot Top 6 Tour Concert” will be announced early next month.

Meanwhile, trot singer Kim Ho-joong, who came in fourth in the competition, will not be appearing in the upcoming concert featuring the top six finalists of the TV Chosun's hit audition show as he began his mandatory military service this month after being embroiled in criticism in late August for his involvement in illegal gambling in the past.

The 28-year-old rose to stardom after finishing fourth in the finals of the show.

Kim, once an aspiring opera singer, earned the nickname "Tvarotti" — a combination of the word "trot" and the name of legendary Italian opera singer Luciano Pavarotti.

HYBE's labels are auditioning for talent in Vegas