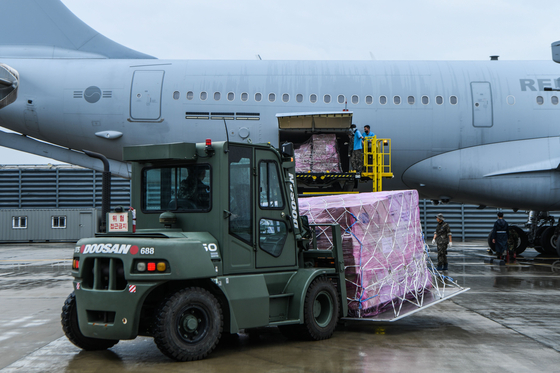 Face masks being loaded onto the Korean Air Force's KC-330 aerial refueling aircraft before it was due to depart to Iraq to evacuate Korean citizens this July. The masks were donated to the Iraqi government. [AIR FORCE]


Newly appointed Minister of National Defense Suh Wook will visit the United States on an Air Force tanker plane next month to discuss the transfer of wartime operational control (Opcon), according to military sources.

Suh, who was appointed last week, will take part in the allies’ annual Security Consultative Meeting (SCM) in Washington after traveling on a KC-330 aerial refueling aircraft, several sources said.

“This is the first time a defense minister has taken a refueling plane, rather than a commercial aircraft, to make an overseas trip,” said one source, who requested anonymity.

“The decision is said to be related to reductions in commercial flights due to recent coronavirus outbreaks.”

The KC-330 Cygnus is formally known as a Multi Role Tanker Transport (MRTT), capable of carrying out diverse operations in addition to refueling aircraft mid-air.

Save for its aerial refueling equipment, the aircraft is almost identical to an ordinary commercial plane, as it is based on the design of the 300-seat Airbus A330-200.

“At the time we commissioned this plane, we chose it over its competitor, the Boeing KC-46A, because we concluded it could perform a greater variety of operations, like the transportation of military personnel," a source said.

According to the Air Force, the KC-330 has six business class seats, reserved for high-ranking officers and crew, and 296 regular seats.

The plane’s utility has become particularly clear amid the Covid-19 pandemic. According to one military source, the demand for the plane has increased significantly within the military due to an ongoing crunch in international flights.

“[Unlike the KC-330,] the C-130 transport planes originally used by the military are slow and not conducive for long-range travel, as the planes could only make it as far as Southeast Asia before they need refueling,” the source said. “The plane could only fit around 90 people and the seats were uncomfortable.”

The KC-330 proved its worth in the government’s evacuation operations of Korean citizens this year. In July, 293 Korean workers in Iraq were evacuated on two KC-330 planes, which also carried face masks to donate to the Iraqi government.

In June on the 70th anniversary of the outbreak of the 1950-53 Korean War, the plane was also used to retrieve the remains of 147 South Korean soldiers from Hawaii. North Korea earlier that year had repatriated boxes of remains of UN troops, including South Koreans, who died in the war to the United States as a sign of goodwill amid their denuclearization negotiations.

The use of such a plane to transport Suh to Washington testifies to the importance of his trip, which is likely to be the last opportunity this year for the allies to consult the timetable for the Opcon transfer to South Korea.

According to a Korean government source, concern is mounting over whether the envisioned transfer can take place, as scheduled, by the end of President Moon Jae-in’s term in 2022, given the Covid-19 pandemic has delayed necessary assessment procedures about the combat abilities of Seoul’s military.

“If Minister Suh is unable to resolve this issue at the SCM, effectively the last venue for negotiations with the United States this year, then the Opcon transfer may be a foregone conclusion within this administration,” said the government source.