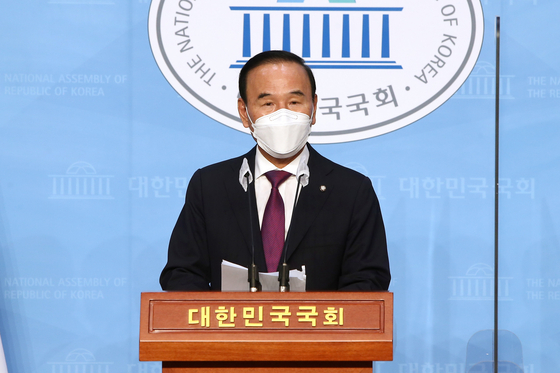 Rep. Park Duk-hyum says in a press conference on Wednesday that he will forfeit his membership with the People Power Party (PPP) and face corruption allegations as an independent lawmaker. [YONHAP]


A main opposition party lawmaker on Wednesday announced he will forfeit his party membership following criticism over the conflict of interest between his family’s construction business and his work on the National Assembly committee overseeing the Land Ministry.

Rep. Park Duk-hyum of the People Power Party (PPP) held a press conference Wednesday to announce his decision to leave the party.

“I decided to leave the party in order to lift the burden off the PPP and my fellow lawmakers,” he said.

Asked if he had consulted with the PPP leadership before announcing his departure, Park said, “Absolutely not.”

Park plans to fight back against political attacks from the ruling Democratic Party (DP) as an independent lawmaker and prove his innocence. He apologized to the public for troubling them with the scandal.

While Park will leave the party, he will maintain his Assembly seat and continue representing Boeun, Okcheon, Yeongdong and Goesan counties in North Chungcheong.

The three-term lawmaker faced accusations from DP lawmakers that construction companies owned by him and his family won massive national and local government projects as a result of his membership on the Land, Infrastructure and Transport Committee of the National Assembly. The committee has oversight of the Land Ministry and affiliated institutions.

Park won his first election in 2012 and started serving on the Land Committee in April 2015. After suspicions arose about possible conflicts of interest with his family businesses, Park stepped down from the committee earlier this month and began serving on the Environment and Labor Committee.

Park rejected the allegations of a conflict of interest, but the DP said Park’s family businesses scored over 100 billion won ($86 million) in revenue through construction and technology contracts secured from the Land Ministry and public institutions supervised by the ministry over the last five years. It said Park must give up his lawmaker seat and submit to a criminal investigation.

The PPP will have 103 lawmakers after Park’s leaving.

As a result of the April general elections, the PPP won 103 seats in the 300-memebr legislature. The party’s total number of lawmakers briefly went up to 104 after it reinstated the membership of an independent lawmaker, Rep. Kweon Seong-dong, last week.

Think over your raison d’être