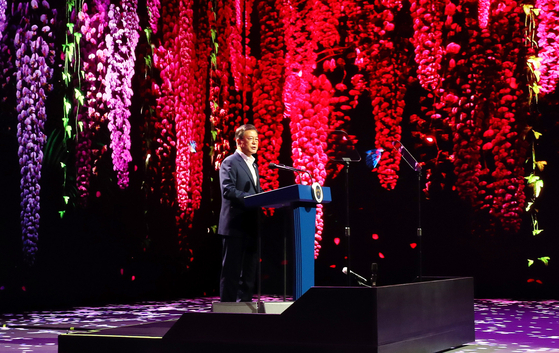 President Moon Jae-in emphasizes the need to strengthen digital cultural and entertainment industries at an online exclusive performance center in Gimpo, Gyeonggi on Thursday. This is his fifth tour regarding the Korean New Deal agenda. [YONHAP]


Culture and entertainment companies are to be supported by a 35 billion won ($29.8 million) government Covid-19 fund next year in an effort to make up for creative output that was lost during the pandemic.

The government will help create an online exclusive performance center, maximize the use of intellectual property appropriate for the digital environment, establish an online distribution platform for Korean cultural and entertainment and support state-of-the-art production technologies.

It also promised to expand the social security system, including allowing artists to subscribe to employment insurance.

“Digital society, which has been suddenly thrust upon us due to Covid-19, is a crisis that our society needs to overcome and also an opportunity for the content industry of expanding to overseas markets while breaking existing boundaries,” said President Moon Jae-in during his visit to Concert Studio CAMP1, an online exclusive performance stage in Gimpo, Gyeonggi, on Thursday.

He especially praised Korea's creative industries, including the outstanding movies like "Parasite", which snatched four Oscars including Best Picture, and BTS, whose latest song became the first K-pop track to debut No.1 on the Billboard's Hot 100 singles chart.

“Thanks to the sharp increase in the exports of Korean games and webtoons, in the first half [of 2020] the balance on culture and art copyrights among the intellectual property trade balance reported a surplus,” Moon said.

The president stressed that strengthening the competitiveness of the digital content industry is key to Korea’s new future.

“This is the opportune time in raising our digital content industry’s competitiveness by combing our digital capacity with our cultural capacity represented by Hallyu,” Moon said. “It is our time to lead a warm digital era with our inclusiveness that puts people first.”

In the first half, while a $1.7 billion deficit was reported for industrial intellectual property, the copyright balance was in surplus by $1.04 billion.

The visit to the performance hall was part of Moon’s Korean New Deal tour, which kicked off in June.

Among the presenters on Thursday were KakaoPage CEO Lee Jin-soo, who talked about the success of webtoon intellectual property, and SM Entertainment CEO Chris Lee, who discussed the latest technology, including augmented reality (AR) used for K-pop concerts held online amid the pandemic.