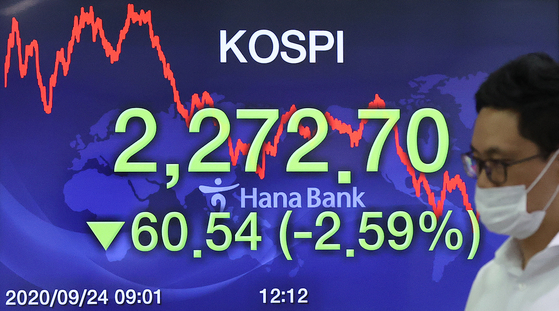 A screen shows the closing figures for the Kospi in a trading room at Hana Bank in Jung District, central Seoul, Thursday. The Kospi dipped to the lowest point since Aug. 3. [YONHAP]


Shares plunged to a seven-week low on Thursday as investors turned risk-averse following overnight Wall Street declines over withering hopes for economic recovery. The won fell against the dollar.

Trading volume was moderate at about 706 million shares worth some 12.3 trillion won ($10.5 billion), with losers outnumbering gainers 831 to 68.

The Kospi dipped to its lowest level since Aug. 3.

"Investors seem to be disappointed by the latest FOMC meeting results, because it didn't signal concrete measures [to tackle the pandemic's fallout] that the market had expected," said SK Securities analyst Han Dae-hoon.

The local currency closed at 1,172.7 won against the dollar, up 8.3 won from the previous session's close.

Bond prices, which move inversely to yields, closed mixed. The yield on three-year bonds lost 2.5 basis points to 0.858 percent, and the return on 10-year bonds remained the same as yesterday, at 0.67 percent.