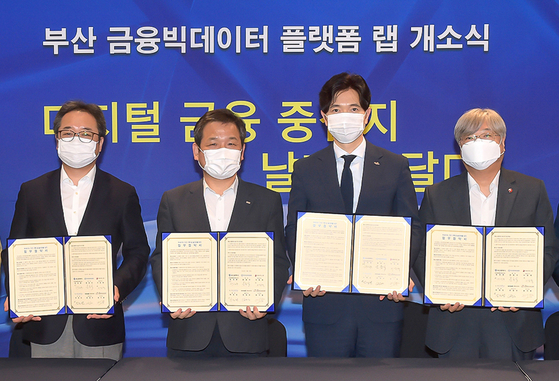 Officials from BC Card and the Busan city government take a commemorative photo to celebrate the opening of BC Card's big data platform lab Wednesday in Busan. [BC CARD]

BC Card’s big data platform lab is a data marketplace that extracts and sells both financial and non-financial data to individuals and companies. BC Card was selected by the government to head the building of a big data infrastructure for the finance sector in May 2019 as part of the government’s Digital New Deal.

The company has been operating a financial big data platform lab in Euljiro, central Seoul, since last December. The lab has been gathering and analyzing consumption and real estate data to help city planners improve electricity management systems for apartments.

Eleven companies including KT, research firm Nielsen, VAIV Company and Korea Association of Property Appraisers are providing data to the lab in Seoul. According to the company, 169 companies and 2,358 individual entrepreneurs have utilized data provided by the lab as of August.

BC Card said its Busan branch will be given an equal level of support as its Seoul division.

The company will expand its financial big data platform lab into other regions to support businesses and startups outside the Seoul metropolitan area.