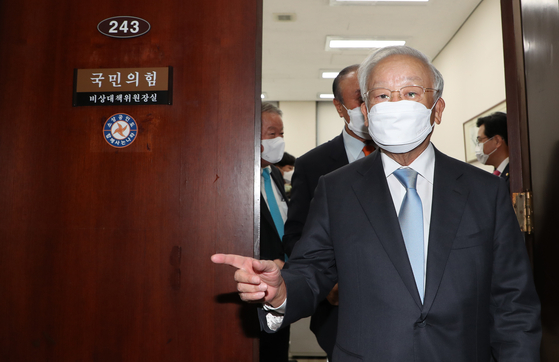 Sohn Kyung-shik, chairman at Korea Employers Federation (KEF), comes out of an office after meeting Kim Chong-in, an interim leader of the main opposition United Future Party at the National Assembly in Yeouido, western Seoul, on Wednesday. [YONHAP]


The government is facing mounting criticism over legislation containing new rules for companies, with business leaders squawking about how they will hurt local firms.

A day after Sohn Kyung-shik, chairman of the Korea Employers Federation (KEF), visited lawmakers at the National Assembly to express concerns about revisions to the Commercial Law and Fair Trade Act on Wednesday, the Justice Ministry announced new legislation designed to expand the legal scope of class-action suits and punitive damage awards.

On Tuesday, Park Yong-maan, chairman of the Korea Chamber of Commerce and Industry, made a visit to the National Assembly with the same agenda as Sohn.

As for the proposed legislation, one bill would extend compensation from a class-action suit with more than 50 plaintiffs to nonplaintiffs if those people have been similarly affected by a situation.

Another bill would make punitive damage claims easier. Current laws allow punitive damage suits if their products cause damages. The new bill will hold companies liable for actions or activities.

Companies could be sued for damages if they act “in an antisocial manner,” according to the legislation, which could include distribution of fake news.

Big business circles consider the bills out of synch with modern times and dangerous to companies.

They say that even in the United States, a stronghold of such lawsuits, questions are being raised about class-action suits.

“The new rules are worrisome since they will increase uncertainties already highlighted by the coronavirus pandemic,” said Lee Kyung-sang, economic research chief at the Korea Chamber of Commerce and Industry.


“The bill for punitive damage would hold companies accountable for verifying that they didn’t commit irregularities, which is harsh on companies,” Lee said.

The class-action suit bill could be flawed too, some say.

“In principle, class-action suits are needed,” said Chang Young-soo, a professor at the Korea University School of Law.

“But what matters is how it can be implemented in a rational manner.”