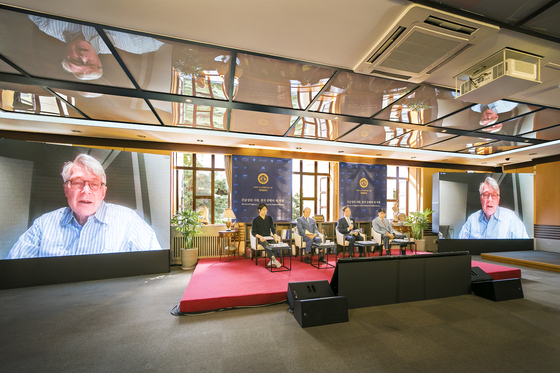 The Peace BAR Festival 2020 took place from Sept. 22 to 23 in celebration of the International Day of Peace under the theme “Era of Urgency, a New Horizon for Political Norms.” Various renowned scholars and experts from across the globe, such as professor Naomi Oreskes (Harvard), Scott Sagan (Stanford) and G. John Ikenberry (Princeton/ES professor of Kyung Hee) participated. Due to Covid-19, this year’s ceremony was held online.

Kyung Hee University and the
International Day of Peace

Since 1982, Kyung Hee University has been holding international academic conferences to celebrate the declaration of the International Day of Peace. After the name change in 2004, the Peace BAR Festival(PBF) succeeded the celebration with the new zeitgeist: making a “spiritually Beautiful, materially Affluent, and humanly Rewarding” society.

PBF 2020, commemorating the 39th annual International Day of Peace, aimed to discuss the upcoming threats humanity will have to face collectively, with the new theme: Era of Urgency, a New Horizon for Political Norms.

The term “new normal” was coined after the Covid-19 pandemic wreaked havoc, insinuating our past ways of living became a thing of history. But Covid-19 is not the first crisis humanity has had to face. The polarization of society and climate crisis has dogged civilization for years, but humans refused to change their lifestyles. Instead, the responses were division and conflict, such as the United States withdrawing from the Paris Agreement and Britain’s Brexit.

A sustainable future would be far out of reach even if a Covid-19 vaccine becomes available. Climate crisis is what’s waiting, and it can only be addressed with international cooperation and collaboration between not only nations but also among citizen. Just as stemming the spread of Covid-19 required personal, and national efforts, collective efforts to overcome nationalism and revamp people’s ideas of cosmopolitanism can shift the balance of the world toward a better end.

This year’s PBF 2020 saw the participation of various scholars such as professor Oreskes and Sagan.

Naomi Oreskes is the recipient of the National Science Foundation’s Young Investigator Award, former consultant of U.S. Environmental Protection Agency, and U.S. National Academy of Sciences. Her works, one of which was published by the renowned Science magazine and quoted in Al Gore’s “An Inconvenient Truth,” fervently criticize modern capitalism and warn of our impending climate-bound doom.

Political science professor Scott Sagan from Stanford, an eminent expert in nuclear weaponry and national security, known for his research on nuclear weapons policy and nuclear disarmament, shared his insights on the venue. He had previously visited Korea in 2019 for the “International Conference on Nuclear Nonproliferation” to stress his thoughts on the matter.


International Day of PeaceCommemoration and discussions

Along with this year’s theme, PBF 2020’s roundtable discussion mainly focused on “Crisis upon humanity and its solutions.”

The International Day of Peace celebration kicked off on Tuesday Sept. 22 with a congratulatory message from Irina Bokova, the former director-general of Unesco and the honorary rector of Kyung Hee Humanitas College. Her message was followed by a discussion with Naomi Oreskes (professor of the history of science at Harvard University), John Ikenberry (professor of international relations at Princeton University) and Ahn Byong-jin (professor of Kyung Hee Global Academy for Future Civilizations) who acted as a moderator. Commemorative remarks by Kyung Hee University System Chancellor Choue In-won followed. Participants discussed the imminent climate crisis and how important it is to change the current political systems and civil societies to face those challenges. “The 200 years of competitive capitalism have lessened hunger and disease, but they have not eliminated them. They brought us new problems. […] The urgent question is never what is the alternative, [but] how do you come to believe that a given alternative can be achieved,” said professor Oreskes.


Roundtable with our newgenerations and scholars


On Wednesday Sept. 23, a roundtable discussion was held with eminent scholars and future generations under the topic: “Existential crisis and our lives’ grand turnover.” Rector Kwon Gi-bung, from the Graduate Institute of Peace Studies, took the role of chairperson for the discussion. Professor Scott Sagan, Yonsei University’s honorary professor Park Yong-Shin and professor Song Jae-ryong of Kyung Hee University participated as panelists as well as Kyung Hee student Seo Sae-jong who acted as a spokesperson for the future generation.

The roundtable discussion started with diagnosing the menaces facing today’s society. “Covid-19 pandemic, climate crisis and nuclear problems. Menaces are prevalent around, us but I do not believe these dangers we face will be everlasting. However, the real problem we have to take on is our deep-rooted distrust against our government, press and society as a whole,” said Professor Sagan.

Professor Park Yong-Shin agreed. “We have to accept that this is not a local but a global problem we face right now. Thus, we should not expect a certain group of professionals to suture our wounded world, or even thinking of falling into petty nationalism.” He also stressed that the current climate crisis is a burden every human has to share.

Professor Song Jae-ryong compared the current reality to the movie “The Perfect Storm.” In the movie, crew members of the ship did not give up the overloaded goods in hopes of a large profit, consequently sinking their ship in a storm before making any use of the precious goods. “Our greed is blinding us in this storm called capitalism. I see a lot of us in the crew members of the ship from the movie,” professor Song said.

Seo Sae-jong, a student participant from Kyung Hee University, suggested a different, microscopic view of the aftermath of this Covid-19 pandemic and environmental changes. According to a report from the World Bank last June, around 100 million people are projected to join the absolute poverty class, making the polarization of the world more severe than yesterday. “The benefits of the advancement of globalization and technology were not distributed evenly around the world. In the same vein, when man-made environmental changes approach, a lot of poor people will get hurt, more than those well-heeled ones. We need to come up with a way to help those people,” Seo said.


Breakthrough by Education and Trust

After an energetic discussion, a consensus was made among participants that the current economic, social crisis was due to hardwired distrust within society.

As a solution, professor Park suggested a notion of a society of philosophers like Plato once adhered to. “We need to foster a society where every citizen could be a driver, a protagonist of the world, not just a mere spectator who delegates their rights to governmental representatives. In other words, we need to take people’s opinions into accounts when a certain law or plan directly affects a certain group of individuals,” he added.

Professor Song went one step further and said that developing a cosmopolitan and self-reflective citizen culture is what is needed. “Thanks to the advancement of technology, we find it easier than ever to gain access to various information and knowledge. Therefore, to reflect our globalized society and its hyper-connected information grid, we need to develop a new pedagogy model to teach our newly defined social responsibility as cosmopolitan society,” professor Song stated.

Participants then moved onto the subject of education. “Our current educational system is focused on a myopic view of human society. The higher form of education must inform students that our lives lie with humanity, not a single human society. Consilience is what this world needs to embrace,” Professor Park said.

“Kyung Hee University taught students values of humanity, nature, society and universe within its Humanitas College for the past 10 years. We tried to ask our students what our duty is as a citizen and a human being. This might seem alien to the common form of education, but we found it imperative to include those messages to teach students a critical viewpoint to the world we live in,” professor Song added.