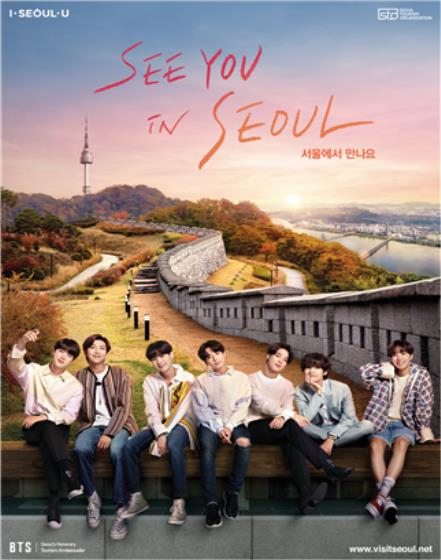 
A promotional video for Seoul featuring K-pop phenomenon BTS exceeded 100 million views across various social media platforms such as YouTube, Facebook and Instagram in the 10 days since its release on Sept. 11, according to the Seoul Metropolitan Government and Seoul Tourism Organization Thursday.

To celebrate reaching the record in the shortest time span ever since the organization began creating the promotional videos in 2017, the city government will be releasing special footage containing behind-the-scenes footage of BTS on Sept. 28.

The government and the organization has prepared other special programs and events to thank fans for the record. More information regarding the events is available in the Seoul Tourism Organization website (www.visitseoul.net) and its official YouTube channel.

Under the theme of “See You in Seoul,” each member of the band takes turns to feature as a guide to virtually show the Korean capital.

Ever since BTS members became honorary tourism ambassadors of Seoul in 2017, the group has annually appeared in Seoul’s promotional videos.

“We hope that Hallyu [Korean Wave] fans around the world can visit Seoul virtually as they watch the promotional video featuring BTS, and dream of Seoul,” said Joo Yong-tae, the head of the Seoul Metropolitan Government’s Tourism and Sports Bureau.