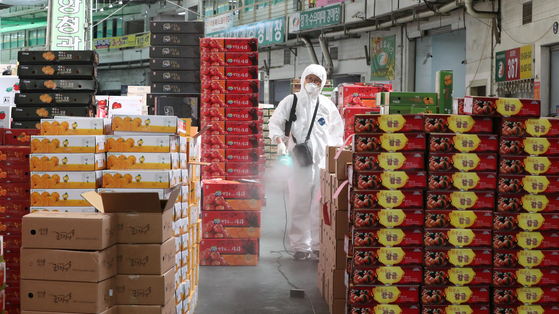 A worker disinfects the fruit section of an agricultural wholesale market in Daejeon Thursday morning. [NEWS1]

Health authorities said Thursday that the so-called Special Prevention Period set to kick off next week in time for the Chuseok holidays might include "tougher" measures than those in the Level 2 social distancing system.

Korea had managed to keep the daily figure below 100 on Saturday, Sunday and Monday.

Since last Sunday, health officials have warned of a new set of restrictions for the entire nation starting Sept. 28 and lasting through Oct. 11, calling those two weeks the Special Prevention Period.

The central government said it won't disclose details about the rules until Friday.

Yet in one vague hint offered during a press briefing Thursday at the Central Government Complex in Sejong City, Sohn Young-rae, an official at the Central Disaster Management Headquarters, said that some measures could be tougher than those in the Level 2 social distancing system, while some others “that are too tough” could be “modified.”

The entire nation is already under Level 2 measures in the three-tier social distancing system, with the rules set to last through Sunday midnight. Immediately after the Level 2 measures expire, the whole country will be subject to the Special Prevention Period rules. 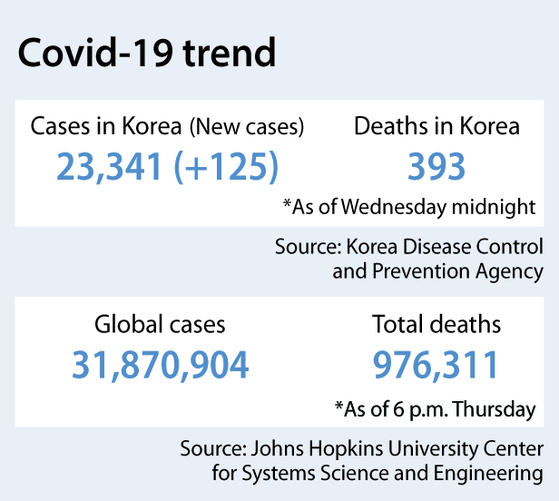 Sohn blamed increasing virus infections over the past two days on sporadic clusters in the Seoul metropolitan area and the fact that fewer people tend to get tested over the weekends, which normally leads to fewer positive test results through Tuesday. It takes about one or two days for a coronavirus test result to be confirmed.

Other than the Chuseok holidays, which kick off next Wednesday and last through Friday, health authorities are also concerned about a slew of big rallies planned by right-wing civic groups on Oct. 3, when Korea celebrates Foundation Day. President Moon Jae-in has threatened a stern legal response against anyone who protests on the street that day in large crowds, but many demonstrators say they won't budge.

The secretary general of one coalition of conservative civic groups told the JoongAng Ilbo Friday that it would go ahead and hold a rally on Oct. 3 in Gwanghwamun, central Seoul, with more than 1,000 people, and would soon file an administrative suit asking a local court to strike down the police’s congregation ban on any demonstration in Seoul involving 10 people or more.

An anti-Moon rally held in Gwanghwamun on Aug. 15 Foundation Day drew some 20,000 people and led to at least 623 virus infections.

Among 125 people who were diagnosed with the virus Wednesday, 109 were local infections: 43 in Gyeonggi, 39 in Seoul, 10 in Incheon, seven in Busan, two each in Gangwon and North Gyeongsang and one each in Daegu, Daejeon, North Chungcheong, South Chungcheong, North Jeolla and South Gyeongsang.

Sixteen cases were imported: Six from Uzbekistan, three each from Turkey and the United States and one each from Indonesia, the Philippines, Japan and Russia.

Five people died Wednesday, bringing total deaths to 393, while 182 people recovered, bringing total recoveries to 20,832. As of Wednesday at midnight, Korea had counted 23,341 virus cases in all.