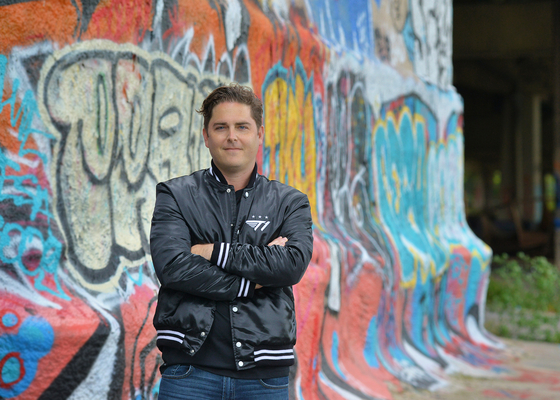 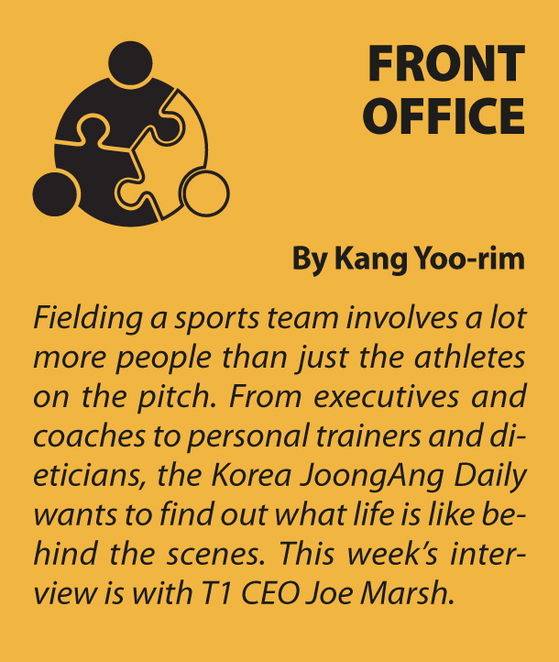 When Esports was first introduced, it was seen by many as regular old computer gaming posing as a competitive sport.

But slowly Esports has made its way into the main stream — or at least close to it — even being included as a demonstration event at the 2018 Asian Games. Of the many games that are competed in competitive Esports, League of Legends (LoL) is perhaps the most popular of all.

Within that world, T1 is a household name. A dominant team in competitive LoL, the Korean Esports team counts Lee Sang-hyeok, better known as Faker, among its members.

As one of the very best Esports competitors in the world, Faker is perhaps the only pro gamer to have crossed over into regular celebrity culture, signing lucrative advertising agreements and becoming the face of Korean Esports.

But while Faker may be a well-known figure, little is really known about the people behind the scenes. Esports is a serious sport with all the officials and infrastructure that goes along with that. Whatever the critics might say, pro gamers aren't spotty teenagers in their parent's basement, they're serious athletes competing in professional teams with comprehensive front office staff, just like baseball and football clubs.

Having started out in the analytics department of the sales division and moving his way around different departments, it wasn’t until late 2017 that Marsh finally moved from more traditional sports to gaming.

Until the company bought the Philadelphia Fusion, Comcast Spectacor was known for its National Hockey League (NHL) team, the Philadelphia Flyers. With the hope of trying to build up the newly bought team, Marsh, one of the younger employees, was assigned to the project.

Working alongside Tucker Roberts, the president of the organization at the time, Marsh made his very first trip to Korea in March 2018.

And this is where the T1 story begins.

When March and Roberts flew to Korea in 2018 they only had one thing in mind: Buying a League of Legends team.

“My first trip with Tucker to Korea was in March of 2018, where I met John Kim, who is now my COO,” Marsh says. “I got to have all these great meetings, and everyone’s saying the same thing: 'Great, thanks for coming, but if you’re really serious about coming to Korea, come back in October, when [the] Worlds is here.' Because it was 2018.”

Marsh took that voice and returned to Korea in October for the 2018 League of Legends World Championship, known as the Worlds. After flying into Incheon International Airport, Marsh remembers taking the KTX down to Busan.

Having talked to a bunch of teams like Riot, Marsh says that ironically, the very last team he and Kim met was SK Telecom. The team, called SK Telecom T1 at the time, was already a strong competitor with a history of winning the world championship.

“They’re the best partner you can possibly have,” Marsh says. “The reason no one ever thought SK Telecom would [partner] with anyone is because they are a big company and we were talking with another big company in Comcast Spectacor and Comcast.”

Although it took almost a full year for the deal to be done, it was worth it, as T1 ended up backed by two huge companies: Comcast and SK Telecom.


A day in the life

Marsh may be the CEO of one of the top teams in a cutting-edge sport, but he's still a CEO. He spends most of his day taking phone calls, answering emails and running between meetings.

The front office at T1 may be different from the front offices in traditional sports in the sense that it’s smaller, but that doesn’t mean the work doesn't pile up. Most of the decisions are made by Marsh and Kim, who operate like executives in any other company with one huge exception: Marsh is based in the United States, but lives and works in Korea time.


“I don’t want to bother people and talk to them at midnight their time,” Marsh says.

“Typically, because of the 13-hour time zone change, I’m trying to be on duty because that’s how I get to talk to everyone,” Marsh says.

Marsh says that he gets a little time to himself between 4 a.m. to 9 a.m., and that’s when he gets his work done. Since T1 is trying to expand globally, during the day, when his employees are asleep in Korea, Marsh has no time to rest as he still has calls and meetings to get through.

Despite his busy schedule, he says that he is fortunate to have Kim as COO of T1 as “he’s able to hold things down in Korea while I’m over in the States.”

While his normal day includes a lot of desk work, on game days, things are a little different. Also operating on Korea time, Marsh says the earliest match for him would be around 4 a.m. But of course there's a pre-match routine to get through first.


“[I] see the posting and check with John and stuff,” Marsh says. “Who’s playing, what’s the mood. And then I try not to tweet too much because on game days I get hyper-focused about what’s happening. I don’t want to jinx the team or say something dumb.”

During the match, Marsh says that he texts Kim and the board. However, as T1 has been the top team for years, Marsh says every game is important and stressful to watch.

“For us, every game is important, especially in League of Legends,” Marsh says. “When we get to the playoffs, even more. We have a legacy to uphold, fans that are very active and want us to do well. We're always working hard to achieve those goals for ourselves and the fans. Game days are stressful.”

Of the stressful moments throughout the game, Marsh says it’s the team fight that makes him the most nervous as it sometimes feels like a math problem.

Having spent years working his way up from bottom of the industry to get to where he is now, Marsh isn't exactly the "sit back and watch" type of CEO.

Despite T1 having a dedicated social media team, Marsh is also very active on social media.

Marsh says that actively communicating with the fans even allowed him to pick up a few League of Legends tips.

In addition to the business aspect of becoming a friendly company, another reason behind Marsh’s activity on social media is his effort to protect the team.

“Like if [fans] want to have an outlet after we win or after we lose, I’d rather have that feedback come directly to me than to the players,” Marsh says. “I'm just trying to interact and engage. I stream like every other week with the fans. Just chat with them.”

While Marsh enjoys interacting with the fans, he admits there are highs and lows. This summer, T1 hasn’t played their best, finishing fourth in the League of Legends Champions Korea (LCK) Summer 2020 season. Of course, Marsh still believes in his team.

“Even if we’re not winning right now or whatever it is, I think we’re always going to get back to those winning ways,” Marsh says. “Just because of the infrastructure we have placed ourselves in our building. We invest heavily in our players and staff to give them all the tools necessary.”

The T1 organization has spent years planning their new headquarters in Seoul, currently under construction. The end result will focus on providing the best possible atmosphere for both the gamers and staff.

While many traditional sports fans may think that Esports lacks the physicality of other sports, Marsh really believes that it is “really about mind, body soul.” For this reason, T1 is building a fitness center so the players can concentrate on their off-screen fitness.

“Traditional sports found that many years ago,” Marsh says. “Nike and T1 are trying to bring that into gaming. It’s really important to take care of everything, not just how great you are at the game. You have to eat right. The guys are working out. They do a lot of yoga and stretching and those kind of body weight movements. Some of them are lifting, which is really cool to see. So we just want to give them every opportunity to keep growing as people.”

Along with the fitness center, Marsh made sure to include every possible feature in the building to make everyone feel at home. To do so, the construction is heading into its 10th month now, with the majority of the building finished between January and May. Of the many features, Marsh's favorite addition is the the heated floors on the players’ floor.

“A lot of love went into that building,” Marsh says. “My favorite is the heated floors on the players’ floors, so in the winter the boys are comfortable. Most of the time, they wear slippers or no shoes. We’re a shoe-free building anyway. It’s good to have some comfortable floors for them.”

For years, T1 has been Korea’s top Esports team, but only Korea’s. Marsh and his team are slowly working on expanding the company in the United States to make T1 a truly global organization.

T1 has managed to keep hold of Faker — who’s sort of like Lionel Messi, LeBron James and Christian Yelich rolled into one in the League of Legends world — despite lucrative offers from other leagues. But as a first-generation pro gamer, Faker may already be nearing retirement. The team has been actively looking to develop his successor, but it’s not all about the individual players.

“It’s not just about having the best individual player, it’s about how those five players can work together,” Marsh says. “That’s the most important part. You can have more skilled mechanical players than someone else, but if they’re not working as a team, you’re not going to win. It’s like a recipe, finding the right ingredients for the chance to win.”

Of course that doesn’t mean they aren’t thinking about the next Faker.

“Just know that we are investing in future athletes, especially in Korea,” Marsh says, although he’s not allowed to discuss specifics. “It’s really important to invest in that next generation. Not just in the sense of gaming. I’d like to be global in gaming and Esports.”

It’s important to find a great player, but Marsh believes that it’s even more important to teach them how to present themselves in public.

“Teaching them things other than just how to be good at games is really important,” Marsh says.

“How you look, how you present yourself, how you dress are really important. Who’s the next Faker? Finding that and cultivating that. There’ll be people similar to him, and hopefully they’re on T1. But for now, we are lucky to enjoy the one and only Faker.”